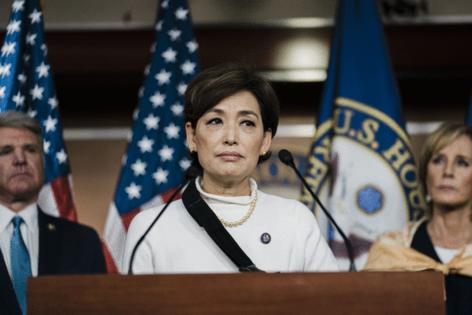 LOS ANGELES — GOP Rep. Young Kim of Orange County, California, has all the elements for a fairly easy path to reelection in November — a gloomy national mood favoring her party, a formidable campaign war chest and a new, more Republican-friendly district. Most prognosticators considered her June 7 primary to be an afterthought.

But now she is campaigning with a sudden sense of urgency. Kim has unleashed $1.3 million in advertising as the primary approaches. Outside allies are coming to her aid with more spending.

Most of Kim's focus is on fending off Greg Raths, an underfunded GOP opponent who has been a staple on the political scene in Mission Viejo, the district's largest city. After years of touting her bipartisan bona fides, she is upping her appeals to the GOP base, emphasizing her conservatism and hard-edged rhetoric on illegal immigration.

The explosion in spending may just be a cautionary measure, or a sign of a suddenly rattled front-runner. More broadly, Kim's tilt further to the right reflects redistricting's influence on politicians. With a shift in district boundaries, Kim's campaign style has shifted too — vying for a constituency that is more conservative and less diverse than the residents she now represents.

"We think she is the heavy favorite to win reelection, but you can't win re-election if you don't make it through the primary first," said Nathan Gonzales, editor and publisher of Inside Elections, which provides nonpartisan campaign analysis. "I don't think campaigns make these sort of moves unless there is a concern she isn't going to make the top two."

Kim still enjoys the powerful benefits of incumbency. If, in a huge upset, she fails to advance, the implications could reverberate in the national battle for control of the House. The sole Democratic candidate, physician Asif Mahmood, would have improved chances of turning the seat blue, a rare pickup opportunity in a cycle where his party is largely on defense.

Kim's campaign portrayed the moves as due diligence that was long expected, particularly because she must introduce herself to 80% of the district's voters.

The first hints of a changing campaign dynamic came earlier this month, in a text message from Kim linking Raths, a Mission Viejo city councilman, to President Biden, blaming them both for illegal immigration. "We CANNOT risk the Raths-Biden agenda," it read.

Since then, her advertisements have continued to pile on Raths, showing his photo with House Speaker Nancy Pelosi and accusing him of being liberal.