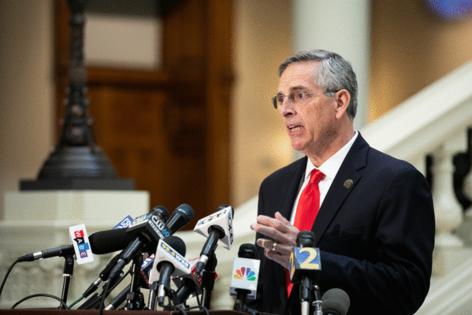 ATLANTA — The Fulton County District Attorney’s wide-ranging criminal investigation into efforts to overturn Georgia’s 2020 presidential election is heating up, weeks after the seating of a special purpose grand jury with subpoena power.

Jurors are slated to hear closed-door testimony from Secretary of State Brad Raffensperger on Thursday, according to his subpoena, which was obtained by The Atlanta Journal-Constitution through an open records request.

They also filed separate subpoenas to interview five of Raffensperger’s current and former top aides, including Deputy Secretary of State Gabe Sterling, the week of June 6 and at least one state senator later in the month.

“You comply with subpoenas,” Sterling told Channel 2 Action News, which first reported news of his subpoena. “You go in there, you tell the truth, follow the law and that’s what this office always does and will continue to do.”

Raffensperger will be one of the first witnesses from which the 23-person special grand jury hears testimony since jurors were selected on May 2. Fulton DA Fani Willis has refrained from calling witnesses to testify during the month of May to avoid appearing politically motivated ahead of this week’s primaries.

But with those elections in the rearview mirror and key witnesses like Raffensperger, Gov. Brian Kemp and Attorney General Chris Carr now clear of their intraparty battles, the jury is expected to issue a flurry of additional subpoenas in the weeks ahead.

Raffensperger is at the center of at least two of the events being examined by Fulton County prosecutors.

The first is the hour-long phone call Trump placed to him on Jan. 2, 2021, in which the then-president pressed Raffensperger to “find” 11,780 votes to reverse Democrat Joe Biden’s win in Georgia.

The second involves another call that Raffensperger received two months earlier, in the days following the Nov. 3 election, from Trump ally U.S. Sen. Lindsey Graham, R-S.C. Raffenpserger said that Graham had questioned him, as election officials conducted a recount and audit of the presidential race, about whether he had the power to disqualify more absentee ballots based on mismatched signatures.

The special grand jury requested that Raffensperger provide evidence, including any writing “that memorializes the events” surrounding his phone call with Trump, as well as a log of telephone calls between members of the secretary of state’s office, Trump or his associates.