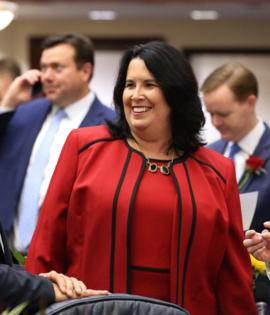 Sen. Stargel, who is leaving her seat to run for Congress in the crowded GOP primary race for the newly drawn U.S. House District 15, got a “no” vote from her daughter Mary “Hannah” Stargel via a series of TikTok videos that pleaded, “Do not vote for the worst Mom ever.”

‘Do not vote’ plea

“So, Senator Kelli Stargel of Florida, the one who just passed the 15-week abortion bill for the state of Florida, which excludes incest and rape is now running for Congress,” Hannah, 28, said in the TikTok video captioned “Do not vote for the worst mom ever” on Monday.

“This is the same senator who passed the bill saying that trans middle schoolers and high schoolers will have a harder time to play sports in the state of Florida than even in the Olympics. Considering the fact that Kelly Stargel is my mother and sent me to a troubled teen facility when I was only 15, I don’t think that she really has a right to tell you or anybody else who can and can’t be a mother, because she wasn’t even a mother to her own children.”

Hannah told Axios Tampa Bay, which reported the flap between mother and daughter on Friday, that “Anybody can speak out against somebody. But I feel like I have more firsthand experience with my mom and that could make a difference.”

Among the issues she says she has with her mom, aside from her mom’s voting record, Hannah, who identifies as bisexual, says she was sent to a Christian boarding school in Texas by her parents and was neglected.

“This is the same woman who wouldn’t feed me if I didn’t go to church on Sunday,” she said in her TikTok post. “After numerous years of telling me I was hard to love, putting me through tons of years of neglect, putting politics before everything else and, honestly, just being a horrible, horrible person to look up to, is this really somebody you want up in DC passing laws for you and your children, telling you what to do with your body?”