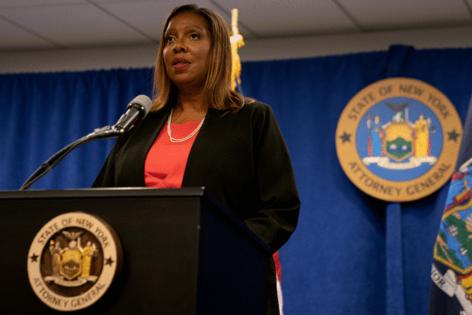 Donald Trump’s federal lawsuit challenging the authority of New York to investigate his sprawling real estate business was dismissed, the latest setback in efforts by the former president to halt the three-year-old probe.

Trump had pointed to numerous public statements by James, a Democrat, to suggest the probe was politically motivated, including a claim in a 2018 speech that Trump “can’t go a day without threatening our fundamental rights.” Sannes said that wasn’t enough.

“The fact that defendant’s public statements reflect personal and/or political animus toward plaintiffs is not, in and of itself, sufficient” to show that the probe itself was biased, Sannes, a Barack Obama appointee, said in the ruling.

“There is no question that we will be appealing this decision,” Trump’s lawyer, Alina Habba, said in a text message. James’s “egregious conduct” means the investigation is being carried out in “bad faith,” she said.

The suit, filed in December, was a key part of an aggressive new legal strategy implemented by Trump in the past year. That included a suit accusing Hillary Clinton of conspiring against him, along with a $100 million complaint against his estranged niece Mary Trump and the New York Times over an award-winning story on his finances.

The decision Friday is a victory for James, who argued Trump filed the suit as a desperate delay tactic after a state court judge repeatedly ruled that the investigation was proper. On Thursday, the attorney general’s subpoenas for sworn testimony from Trump and two of his children, Donald Trump Jr. and Ivanka Trump, were upheld by an appeals court.

“Time and time again, the courts have made clear that Donald J. Trump’s baseless legal challenges cannot stop our lawful investigation into his and the Trump Organization’s financial dealings,” James said in a statement. “No one in this country can pick and choose how the law applies to them, and Donald Trump is no exception.”

James started the probe into the Manhattan-based Trump Organization after his former lawyer and fixer Michael Cohen testified to Congress in 2019 that the company had issued fraudulent financial statements. That gave her office a clear justification to investigate, the state and federal courts held.

A major focus of James’s probe has been the Trump Organization appraisal of Seven Springs, a 212-acre estate in Westchester County, New York. Her office has been trying to determine whether the company gave an accurate valuation for the property when it served as the basis for about $21.1 million in tax deductions for donating a conservation easement for the 2015 tax year. Trump’s 40 Wall Street skyscraper and his Chicago hotel are also being scrutinized.

In July, the Manhattan district attorney, in cooperation with James, charged the Trump Organization and its longtime chief financial officer, Allen Weisselberg, with an array crimes associated with untaxed benefits the executive had received, including the use of luxury cars and apartments. Weisselberg and the company have denied wrongdoing.