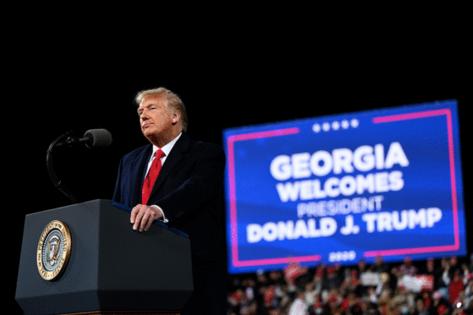 The interviews, first reported by CNN, involved at least one Republican who decided to take his name off the electoral list, along with one other activist who rejected an offer to join the group. In all, four Republicans decided not to join the slate of 16.

Patrick Gartland said investigators pressed him on whether he talked to Trump or Rudy Giuliani, the former president's attorney. He said they "probably left disappointed" when he told them he had no interaction with them or other top GOP figures.

"Basically, they thought I was doing it because I was mad Trump lost," said Gartland, who said he decided not to join the slate because his wife died, not because of any political reason. "I told them I know a lot of somebodies but that I was a nobody."

Jason Shepherd, a former Cobb GOP chair, was also interviewed by federal investigators who sought specific documents after Oct. 1, 2020, that were related to discussions on the alternate slate of electors.

"I didn't have much to share. I searched for relevant documents and couldn't find anything," Shepherd told The Atlanta Journal-Constitution. "It was very cut and dry. If I had anything I would have shared it."

Gartland tried to recruit Shepherd to take his place, but he said he declined because by then it was clear the pro-Trump efforts to invalidate Georgia's election had failed.

Shepherd said he searched through texts, chats and emails but he had been kicked off a private GOP message group and didn't have access to dispatches from the "inner circle in state party leadership."

Shepherd added that he suspected prosecutors contacted the people outlined in a January 2022 AJC story about Republicans who refused to serve as false electors.

C.J. Pearson, who didn't serve as an elector because he moved to Alabama to attend college, said investigators contacted him but he hasn't been interviewed yet. He told the AJC he was willing to cooperate.

Two other Georgians who refused to serve on the phony slate of GOP electors didn't immediately comment late Thursday on whether they had been interviewed by federal investigators.

John Isakson, the son of the late U.S. Sen. Johnny Isakson, previously told the AJC he agreed to serve as a Trump elector if the former president won reelection but refused to be included on the new slate. He said that participating seemed like "political gamesmanship."

The fourth wouldbe elector, state Rep. Susan Holmes of Monticello, had previously declined to comment on her decision not to join the slate.

The 16 Republicans who filled out the fake slate are a cross-section of influential leaders. They include state GOP chair David Shafer and state Sen. Burt Jones, a Trump-backed candidate for lieutenant governor.

Jones, who was the top vote-getter in Tuesday's primary, has not been contacted by the Justice Department and isn't a known subject of investigation, officials said.

It's the latest sign that investigators are sharpening their scrutiny of the Republican electors who met at the state Capitol in December to authorize a false slate for Trump.

The Justice Department also is reviewing phony Electoral College documents to determine whether the electors committed crimes, and a congressional committee investigating the Jan. 6 insurrection issued subpoenas to two Georgians on the fake slate.

And Fulton County District Attorney Fani Willis recently confirmed that the phony GOP electors were also under scrutiny as part of her investigation into Trump's attempt to reverse his defeat.

MINNEAPOLIS — Don Samuels is waging his Democratic congressional primary battle against nationally known U.S. Rep. Ilhan Omar with the hope that Minneapolis voters will reject her campaign like they did last year's ...Read More

Inflation is accelerating at the fastest pace ...Read More