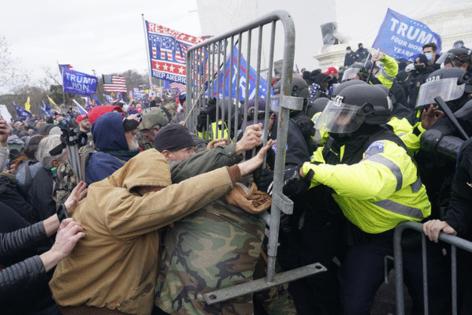 Reports that then-President Donald Trump reacted favorably as the Capitol mob chanted “Hang Mike Pence” on Jan. 6, 2021, is a fresh reminder that Trump is, at his core, an aspiring anti-democracy strongman — one who still has a realistic prospect of winning the 2024 GOP presidential nomination. For years now, Republican politicians who support Trump, either tacitly or explicitly, have mastered the art of shrugging off these kinds of blaring red warning signals.

They shouldn’t be allowed to. For starters, every one of the 21 Missouri Republicans seeking the party’s U.S. Senate nomination should face demands from their audiences and the media to respond specifically to this, and to Trump’s continuing refusal to accept the judgment of voters in 2020.

Trump’s fury at Pence, his own vice president, stems from Pence’s refusal on Jan. 6 to invalidate Joe Biden’s election victory. Pence had no power to do so — the notion that a vice president could unilaterally hand the president (and thus himself) an unearned second term is constitutionally ludicrous on its face — but some of the more squirrelly characters around Trump fed his delusion. Pence, to his eternal credit, refused to even entertain this deeply un-American idea, thus drawing Trump’s public condemnation and the mob’s violent chants.

That much has been long established. The new information, based on leaks from the House committee investigating the Jan. 6 attack, is that Trump, watching the melee on TV in the White House, remarked that perhaps Pence should be hanged.

Trump issued a statement denying the allegation, but coming from the most demonstrably dishonest president in America’s history, his denial means exactly nothing. The revelation came from a former White House staffer quoting Trump’s own chief of staff, Mark Meadows, who related Trump’s comment to others in front of witnesses. The witness (unlike Trump) testified under oath. Meadows has declined to comment but pointedly hasn’t denied it. Put it all together — along with what the country knows of Trump’s personality — and it probably happened.

Which should put the spotlight on former Missouri Gov. Eric Greitens, Missouri Attorney General Eric Schmitt, U.S. Reps. Vicky Hartzler and Billy Long, and Missouri’s other GOP Senate candidates. They and most of the field have either explicitly allied themselves with Trump (in the cases of Greitens and Long) or have notably refused to publicly disavow him.

The fact that Trump’s allies and enablers can pretend not to notice each new example of Trump’s unfitness for office is a measure of how the party has normalized his deeply abnormal behavior. As long as he remains a viable 2024 presidential prospect who offers his coattails to other Republicans, those candidates have an obligation to either disavow him, or explain how they can possibly defend him. With democracy at stake, silence shouldn’t be an option.