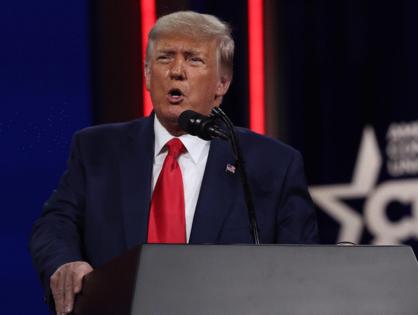 Former President Donald Trump vowed to speak at this weekend’s National Rifle Association convention even after an 18-year-old gunman killed 21 people, including 19 children, at a Texas elementary school.

Denouncing “politicians and partisanship,” Trump said he would appear as scheduled on Friday at the pro-gun group’s annual confab in Houston, about four hours east of the town of Uvalde where the slaughter unfolded.

“Americans need real leadership and real solutions at this moment,” he wrote in a post on his new Truth Social platform.

Trump echoed complaints by Republican leaders that Democrats are seeking to make political hay out of the latest horrifying attack.

“We all continue to pray for the victims, their families and our entire nation,” Trump said. “We are all in this together!”

Trump will be joined by Texas Gov. Greg Abbott, Sen. Ted Cruz, R-Texas, and other GOP leaders at the convention.

Texas is one of the most pro-gun states in the nation and has few restrictions on gun ownership or carrying firearms.

But firearms will be banned at the event because the Secret Service is handling security for Trump.

Republicans say restricting guns would not prevent mass shootings in schools or anywhere else. They call for better security and even arming teachers, even though most experts say putting more guns in schools would not be a good idea.

Democrats and the majority of Americans who back tighter rules on guns note that the U.S. has by far the highest rate of gun ownership in the world and also the highest rates of mass shootings.