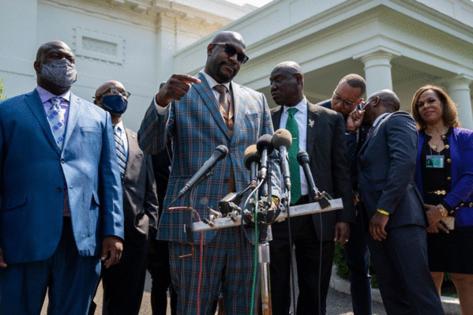 The order would have the Justice Department and other federal law enforcement agencies create a database of officer misconduct, limit chokeholds and no-knock warrants as well as mandate body cameras for officers, according to a fact sheet released by the White House.

Those echo some provisions at the heart of months of bipartisan Senate talks over a House-passed policing bill, which officially ran out of steam in September when negotiators failed to reach a version that could overcome Republican opposition to pass the Senate.

Biden campaigned on addressing police misconduct on his way to the White House and promised executive action last year after those talks fell apart.

For the last two years, policing, race and justice have become some of the most contentious issues in American politics. Floyd’s death led to protests and unrest nationwide after a video showed Officer Derek Chauvin placing his knee on Floyd’s neck for several minutes despite Floyd saying he couldn’t breathe.

Democrats and Republicans pushed competing bills in the wake of Floyd’s killing, then blamed each other when Congress passed nothing.

In a call with reporters describing some details of the order, senior administration officials told reporters that Biden’s order is necessary to restore trust in communities that have been targeted by police excesses.

“This would be a really big deal for purposes of meaningful reform,” a senior administration official said.

A senior administration official said the order would have agency heads consider using grant conditions or accreditation standards to encourage state and local officials to participate.

The order has the backing of the Federal Law Enforcement Officers Association and other police groups, the administration said. In a statement issued Tuesday, the president of the group, Larry Cosme, praised the order.

“Today’s order strikes the correct balance between understanding the public need for accountability and understanding the law enforcement needs for ensuring all communities are safe and protected,” Cosme’s statement said.

Other groups, such as the National Action Network, praised the order as well. The group’s president, the Rev. Al Sharpton, called the order “an important step toward dealing with the issues of accountability and public safety.”

“George Floyd woke us up, and we should not go back to sleep,” Sharpton said. “The failure of the Senate to pass the George Floyd Justice in Policing Act is still something that we will never give up on.”

At the same time, Biden’s order is limited in its scope, and does not address the vast majority of law enforcement agencies across the country. Senior administration officials noted that without legislation, the order cannot mandate any changes for state or local law enforcement — a major goal of the police reform movement that roared to prominence after Floyd’s death.

Democrats similarly backed off an effort to pass new language on police misconduct in a spending bill earlier this year amid Republican accusations the bill would defund local law enforcement.

Additionally, officers would have a duty to intervene if they see others engaging in excessive force and a duty to render medical aid.

Administration officials said Biden plans to sign the order at the White House Wednesday along with federal law enforcement officials, members of Congress and family members of Floyd, Breonna Taylor and Elijah McClain — all three of whom died at the hands of local police officers.

On Aug. 2, staid, conservative Kansas gave the United States one of the biggest jolts in an election season in which Democratic disaster and Republican ascension had been such an accepted fact that left-wing media’s ...Read More

The landslide victory for abortion rights in a Kansas primary election this month was the first direct expression of voter sentiment on the issue since the U.S. Supreme Court overturned the nearly 50-year-old ...Read More

WASHINGTON — A senior Democratic lawmaker said he hasn’t seen any evidence that materials the FBI seized from Donald Trump’s home were properly declassified, casting doubt on the former president’s explanations.