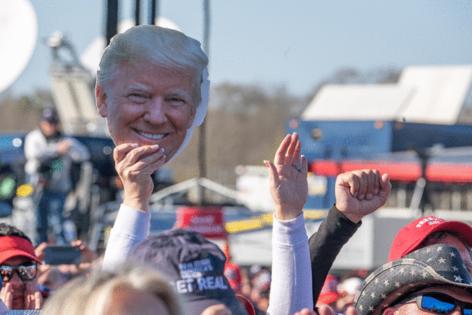 ATLANTA — No state has been at the center of Donald Trump's obsession with overturning his 2020 election defeat so much as Georgia. And Tuesday's primary results offered more of a rebuke than an embrace of his attempt to reshape the state GOP.

Former U.S. Sen. David Perdue was demolished by Gov. Brian Kemp despite making his allegiance to Trump — and his false claim that the election was "rigged and stolen" — the defining message of his campaign.

Secretary of State Brad Raffensperger, who famously resisted Trump's demand to "find" enough votes to reverse his defeat, notched a surprise victory over U.S. Rep. Jody Hice, who earned the former president's blessing after he voted to block the confirmation of Electoral College votes to seal Joe Biden's win.

And several down-ticket candidates endorsed by Trump because they clung to his lies about widespread election fraud sputtered against statewide incumbents closely tied to the governor.

But Trump's loyalists could claim victories beyond the five safe U.S. House incumbents he endorsed. State Sen. Burt Jones appeared headed toward at least a runoff — if not a clear victory — in his bid for lieutenant governor.

And Herschel Walker easily staved off five Republican rivals to win the party's nod for the U.S. Senate, setting him up for a November showdown against Democratic incumbent Raphael Warnock.

The former football star, however, had such towering name recognition from his playing days he likely needed little help from the former president.

In all, Trump backed 13 Republican candidates in Georgia — some of them little-known in the state's political circles — as part of his mushrooming vendetta against Kemp.

The first-term Republican has been atop Trump's revenge list since he refused to call a special legislative session to overturn the state's election results and promote the then-president's false claims of systemic fraud.