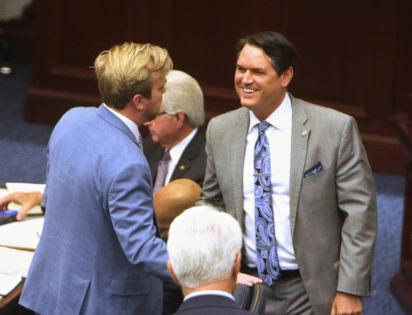 Gov. Ron DeSantis’ new chief elections official, Cord Byrd, could have saved himself a whole lot of justifiable criticism Tuesday if he had simply acknowledged what most Americans know is true — that Joe Biden won the presidency fair and square in 2020.

But he wouldn’t do it. At his very first news conference as Florida’s new secretary of state, Byrd double-talked his way around a question that persists because our democracy is under siege: Did Joe Biden win the election and the presidency in 2020 fair and square, or not?

A yes or no question deserves a yes or no answer, but Byrd wouldn’t give one, even though his job is to instill public confidence in the reliability of election results.

“Joe Biden was certified by the Congress after counting the electors, and he is the president of the United States,” Byrd said.

It’s a fundamental question, and an easy one after Donald Trump’s baseless claims of fraud were tossed out in more than 60 courts, up to and including the Supreme Court.

To not declare Biden the legitimate leader of America undermines democracy and perpetuates the "big lie" — period. For the chief elections official of the nation’s third-largest state to avoid the question is much worse.

It is especially important that Byrd, of all people, get this right, because he enters this job weighed down by excessive partisan baggage over his own record, including support for voting restrictions and a racially gerrymandered map of congressional districts.

Then there’s his wife's extreme rhetoric in support of the Jan. 6 Capitol riot, the Proud Boys, the QAnon conspiracy cult, a reference to future “civil wars” and other fringe claims. Esther Byrd is accountable to the people of Florida too, as a DeSantis appointee to the powerful and prestigious state Board of Education.

Byrd, 51, is a lawyer, staunch defender of gun owners’ rights and former Republican House member from the Jacksonville area.

He was DeSantis’ hand-picked choice to replace Laurel Lee as director of the state’s election apparatus at a critical juncture, with his boss running for reelection to the position he hopes will be a launching pad to the presidency in 2024. The latest overhaul of Florida election laws, championed by DeSantis himself and under challenge in court, includes the creation of a 15-member squad of investigators to hunt for election irregularities.

As we said in a recent editorial, Byrd must put his partisan political past behind and be a nonpartisan overseer of elections in a state closely divided between Republicans and Democrats with a long history of exceptionally close elections. He as much as said so himself at his first news conference, held in Sandestin Tuesday at the summer conference of Florida election supervisors.

But as a high-level appointee who reports to the most partisan governor in Florida history, Byrd is in a tight spot. After all, he belongs to a party whose members overwhelmingly cling to the myth that victory was stolen from Trump.

He also works for a governor who clearly has his sights set on the White House that Biden occupies. The governor has referred to Biden by the euphemism “Brandon,” and to Democrats as the “Brandon party,” as he did at a well-attended Broward Republican Party fundraising event last week in Weston.

For that reason, we stretched the boundaries of news conference norms a bit Tuesday and asked the same question twice, something rarely done.

Did Biden win fair and square — or not? We shouldn’t even be asking that 18 months after the election, after all those legal challenges were thrown out. But the "big lie" persists in part because too few responsible public officials denounce it.

Byrd had a second chance to set the record straight. He demurred again.

“He was certified as the president and he’s the president of the United States. There were irregularities in certain states,” Byrd said before emphasizing that his chief concern is not Wisconsin or Pennsylvania, but in ensuring another successful election in Florida.

On related matters, Byrd sent strong positive signals. He said it’s important for every eligible voter to register. He emphasized the need for a consistently strong dialogue with county supervisors, who praise Byrd for his accessibility.

We challenged Byrd in a previous editorial to prove us wrong, and that we judged him too hastily, by putting aside partisanship and acting on behalf of all Floridians. Tuesday’s platform was an opportunity to do that, but he fell far short of what Floridians deserve.

Californians have little appetite for a rematch of the 2020 presidential race, according to a new UC Berkeley Institute of Governmental Studies poll, with strong majorities of the state's voters hoping neither President ...Read More

COLUMBIA, S.C. — Republican Gov. Henry McMaster has thrown cold water on a controversial Senate proposal that aims to ban the sharing of information about abortion resources in South Carolina.