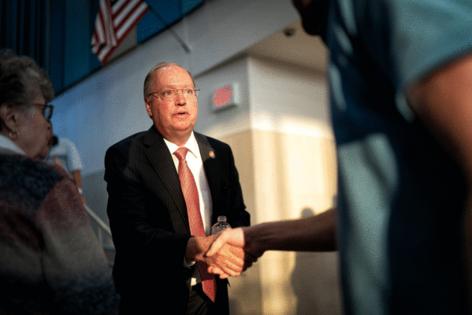 At press time, neither the Republican or DFL primary had been called by The Associated Press.

The winners of Tuesday's contests will advance to the Aug. 9 special election.

Republican candidates faced a challenging environment and time frame to try and stand out from one another in the weeks following Hagedorn's February death after a battle with kidney cancer. Local Republicans' failure in April to endorse a 1st District candidate in the normal midterm election cycle for the seat only added to the uncertainty surrounding the race.

The sprawling 1st District includes large portions of rural farmland as well as the regional urban centers of Mankato, Winona and Rochester, home of the Mayo Clinic. Hagedorn won close elections for the seat in 2018 and 2020 after current DFL Gov. Tim Walz held it for more than a decade.

On the same day of the August special election, a primary will also be held for November's general election race. Voters will decide in that fall contest who represents the redrawn 1st District for a full two-year term under the new lines put in place because of the once-a-decade redistricting process.

Republicans have an advantage in both the old and new versions of the seat. Trump has not made an endorsement so far despite candidates trying to associate themselves with the former president.

Munson, a Lake Crystal Republican, was first elected to the Minnesota House in 2018. He later became one of the first members of a conservative breakaway caucus dubbed the New House Republican Caucus.