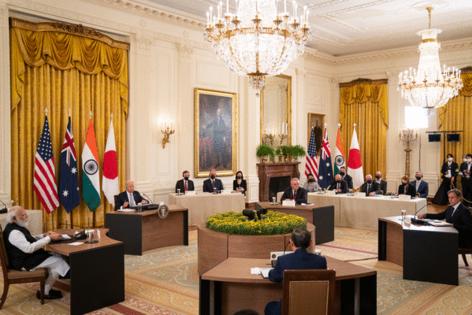 SEOUL, South Korea — When President Joe Biden meets with Indian Prime Minister Narendra Modi and leaders from Japan and Australia this week, it could get awkward.

India is rebuffing Biden’s efforts to join the U.S. and its allies in isolating Russia over its invasion of Ukraine. The world’s biggest democracy continues to buy cheap Russian oil to fuel its growing economy and to fortify its large military with Russian-made weapons and parts. It has refrained from condemning Moscow.

The Biden administration is furiously lobbying India behind the scenes. But don’t expect the president to call out Modi publicly when they meet this week.

U.S. diplomacy has become delicate with India — a vexing holdout over its relationship with Russia but also a cornerstone of Washington’s attempts to compete with China. Navigating that balance, experts say, is tricky.

As part of his swing through Asia, Biden is expected to meet with Modi in Tokyo, likely one-on-one. He is scheduled to speak with the Indian prime minister on Tuesday during a meeting of the Quadrilateral Security Dialogue, known as the Quad, a group that consists of the U.S., Japan, Australia and India.

The Quad has been focused on countering China’s influence in the Indo-Pacific region, but tension has emerged among the four partners over how to respond after Russia invaded Ukraine. Japan and Australia are aligned with American goals when it comes to the Kremlin, creating some division with India as the group tries to present a united front.

“The Biden administration is really trying to manage the relationship and not criticize India, but it is a concern,” said Manjari Chatterjee Miller, the senior fellow for India, Pakistan and South Asia at the Council on Foreign Relations, a Washington think tank. “They can’t afford to alienate India at this point.”

The bigger issue is where India gets its military equipment — about 70% to 80% of it was purchased from Russia. Even if India stopped buying Russian hardware, it would depend for years on Moscow to provide software upgrades, replacement parts and expertise.

“Behind closed doors, the U.S. is pressing pretty hard and the Indian side is signaling that they will wean themselves from Russian weapons, but they can’t do it now,” said Michael Green, an Asia specialist who served in the George W. Bush administration. “They’re too dependent.”