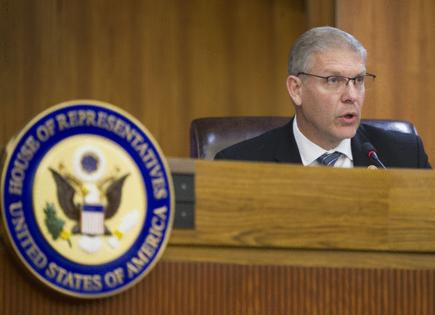 Loudermilk, Carter and Allen are all unopposed in the primary, and all three of their districts are considered safely Republican seats.

The emails sent from Trump’s political committee said they each have his “complete and total endorsement,” citing their support for conservative initiatives like limiting immigration, gun rights and strengthening the military.

“Honored to have President Trump’s endorsement!” Allen posted on social media with a screenshot of Trump’s message.

A representative for Carter’s campaign said they are happy to have Trump’s endorsement. Loudermilk’s campaign could not be reached for immediate comment.

All three men were among the six Georgia Republicans who voted to reject electoral college ballots for President Joe Biden in contested states in the hours after the Jan. 6 riot at the U.S. Capitol.

Trump has already endorsed the other incumbents who also attempted to help him overturn the 2020 election result: U.S. Reps. Marjorie Taylor Greene, Andrew Clyde and Hice.

Reps. Austin Scott and Drew Ferguson, the two Georgia Republicans who voted with Democrats to certify Biden’s victory, have not been endorsed by Trump. Scott does not have a primary opponent; Ferguson does but he is still the heavy favorite.

Trump has also endorsed Jake Evans and Vernon Jones, who are not incumbents, in contested primaries in the 6th and 10th districts, respectively

Trump’s statement backing Loudermilk did not mention that he recently was requested to appear before the U.S. House committee investigating the Jan. 6 attack to provide details of a tour of the Capitol complex he conducted the day prior.

Loudermilk accused the committee of politicizing the riot and said that the tour was a family that included young children whom he escorted to the cafeteria in a House office building.

LOS ANGELES — GOP Rep. David Valadao, one of the most endangered Republican congressional incumbents in the nation, has survived the California primary and will advance to the November ballot.

Valadao, of Hanford, will ...Read More

WASHINGTON — Only a fraction of the demonstrators who poured out after the Supreme Court’s Roe v. Wade decision on Friday returned for a third day of protests outside the court in Washington.

Back-to-back rulings on guns and abortion eliminated any doubt the U.S. Supreme Court will be the transformational force Republicans envisioned when they filled three vacancies during Donald Trump’s presidency.