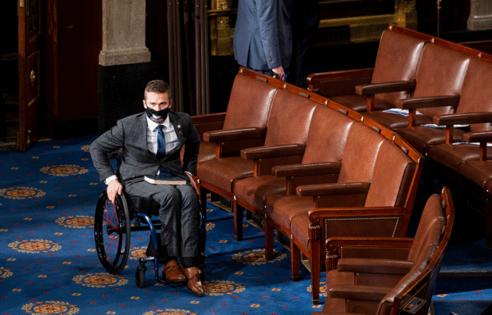 HENDERSONVILLE, N.C. — Election night at Madison Cawthorn’s campaign headquarters started with the vibe of a warm, summertime neighborhood get-together. Supporters were greeted with food trucks, coolers of drinks, and corn hole boards for the kids.

But there was something much more serious at stake: Would the first-term congressman win the Republican primary for a shot at a second term? Would his short time in elected office succumb to the myriad of controversies, or would the support of former President Trump carry him to the general election?

The night was still young, but as the results continued to come in, the path for Cawthorn to overcome his opponent’s lead narrowed.

Earlier that day, Cawthorn had tweeted out to his following of nearly half a million accounts: “Today’s the day we send a message to the Establishment and the Swamp: you have no power over the people. America first will win.”

Cawthorn continued to trail Edwards the rest of the night, though, including in Henderson County, which had been home base for both candidates.

Reporters were told Cawthorn would make an initial statement about the results shortly after 9 p.m. That would be pushed back by another half-hour or so. By 9:20 p.m., nearly three-quarters of the district’s 275 precincts had reported votes.

Edwards maintained a lead of less than 2,000 votes. Cawthorn’s fate was practically determined in the next 30 minutes.

Around 9:45 p.m., the 26-year-old came outside to the densely packed crowd of cheering supporters.

“The race is very close,” Cawthorn said confidently. He thanked Trump for continuing to support him, through the day of the primary, despite the so-called “drip campaign” of unflattering headlines that had dogged his campaign in the final couple of weeks.