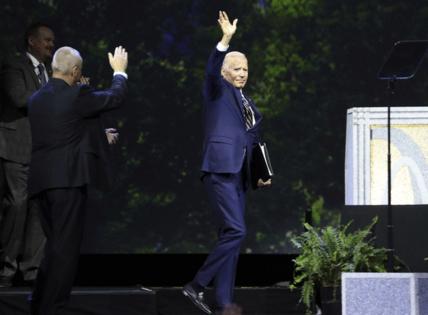 In Joe Biden’s America, life is not easy. For those of us who call Illinois our home, it’s not hard to see how Democrat policies have negatively affected our lives — even more so than our families who live in neighboring states.

I’m a longtime Illinois resident, and it is difficult to watch Biden come to Chicago to co-host a $365,000-a-plate Democratic National Committee dinner with Gov. J.B. Pritzker and listen to him mislead my neighbors on issues from Ukraine to inflation to gas prices and supply chain shortages and not come away disillusioned and bitter.

Inflation has wrecked families and our economy. The latest data confirms that the Consumer Price Index rose by 8.3% in April. It’s the highest level of inflation our country has seen in 40 years. It doesn’t matter if you inherited billions like Pritzker or if you’re a single mom working two jobs to make ends meet or a farmer struggling to get ready for spring planting: Everything and everyone have been hit by Biden’s hidden tax.

Biden attempted to place the blame on rising prices on Vladimir Putin’s invasion of Ukraine. While the president may think voters aren’t paying attention, we are. Prices began rising almost as soon as Biden stepped foot into the White House. Month after month, prices at big box stores, grocery stores, gas stations and even mom-and-pop shops have been forced to raise their prices to contend with rising overhead costs — particularly when it comes to fuel.

On the day of Biden’s visit, Illinois was on its second day of new record-high gas prices. According to AAA, the average gas price that day sat at $4.77 per gallon statewide ($5.15 per gallon in the city of Chicago). Average diesel prices were $5.27 per gallon. It’s no wonder people are struggling to make ends meet. Forced to contend with rising prices, families, small-business owners and farmers are having to pay more for fuel, electricity, meat, poultry, fish, eggs, coffee and so much more. The average family is being forced to spend an additional $569 per month to tackle rising costs.

Meanwhile, supply chain crises that the Biden administration has tried to downplay continue to ravage the nation, which leads to a lower number of products available for Americans to buy. Increased demand for short supply only drives up costs even more. Look at what’s happening to parents. Moms and dads across this country are struggling to find baby formula for their babies, with some having to drive 50 to 60 miles one way just to buy what little is available for their child.

Furthermore, rising crime shows no sign of slowing down. On Monday mornings, families across Chicago pick up the newspaper and turn on the television to see that as many as 30 people were shot over the weekend. Parents used to worry about the safety of their children doing homework in their rooms and playing on the streets thanks to gun violence; now a surge in carjackings has called into question the safety people feel in their cars. A recent study from the University of Chicago suggests the rise in carjacking-related crimes is the result of “economic motivations.” The total veracity of those claims remains to be seen, but it is hard not to look at the current political climate — one that encourages economic downturn and soft-on-crime policies — and not think Biden, Pritzker and Chicago Mayor Lori Lightfoot’s actions are to blame.

Yet, it’s the decision to schmooze with wealthy donors and raise $365,000-per-plate that shows the callousness of this president and White House. Biden has spent his tenure as commander-in-chief thus far blaming everyone and anyone — especially conservatives — for the various crises that have plagued his administration. Not once has he looked to the policies and excessive spending his party has championed as a contributing factor for the hardship families across Illinois face.

In the midst of the struggle we face, Illinois families need true leadership and real solutions. Sadly, Biden’s trip to Illinois provided none of that — just more disappointment.

Don Tracy is chairman of the Illinois Republican Party.

WASHINGTON — Lawmakers in both parties are signaling that Turkish President Recep Tayyip Erdogan should not expect them to sweeten the pot as he seeks concessions in return for dropping his objections to Sweden and ...Read More

My assignment was to illustrate a story on how blue states might receive an influx of abortion patients from neighboring red states after Roe v. Wade was overturned. That's why I was in New Mexico last Thursday, when many ...Read More

By striking down Roe v. Wade which has for nearly five decades protected the right of women to terminate pregnancy, the U.S. Supreme Court has not only turned its back on legal precedent and many of their own personal ...Read More