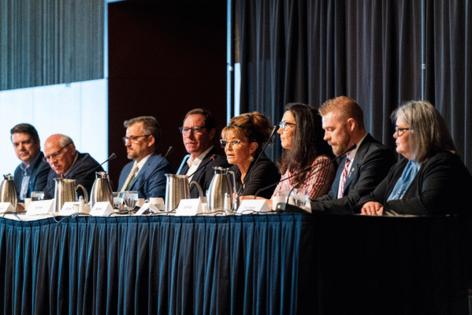 ANCHORAGE, Alaska — Al Gross, an orthopedic surgeon running for U.S. House in Alaska as an independent, owns a rental property in California and part of an office building in Juneau.

One of his chief rivals, Republican Nick Begich, has six figures in cryptocurrencies like bitcoin and litecoin, plus a stake worth at least $1 million in a software company he founded that now has more than 100 employees and offices in three countries.

Chris Constant, one of the Democrats in the race, is still paying off student loans.

The documents, which federal law required from candidates this month, offer a glimpse of each one’s assets and business interests. They also underscore the advantages that personal wealth can bring to a congressional campaign.

Begich, who reported assets worth at least $10.8 million and as much as $46 million, has lent his own campaign $650,000, which represents more than half the cash he’s raised so far.

Gross, meanwhile, spent $730,000 of his own money on his unsuccessful U.S. Senate bid in 2020 — a campaign that laid the groundwork for his short-notice run this year. He reported assets, some held jointly with his wife, of at least $8.7 million and no more than $23 million.

The campaign of a third candidate, Republican former Gov. Sarah Palin, on Tuesday provided a copy of a report that it said had been filed with the U.S. House clerk, though the document was not yet posted to the clerk’s database.

The sums that Begich and Gross have each disclosed spending on their campaigns, meanwhile, represent roughly 10 years of income for Alaska’s median household.

Wells Fargo, which manages the largest branch-banking systems in the U.S., on Monday told its 246,000 employees that as of Friday, July 1, "we're expanding the coverage of our travel benefit to include reimbursement of ...Read More

Trigger laws, meant to go into effect in the absence of ...Read More