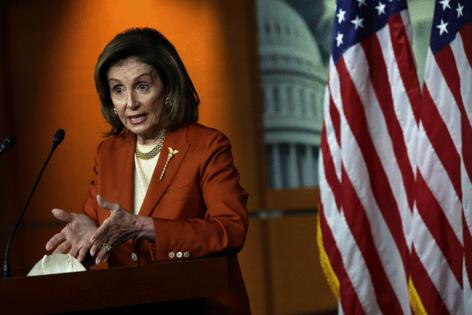 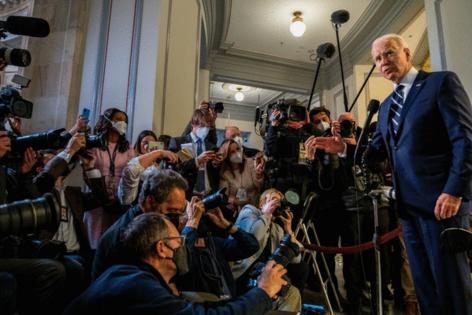 WASHINGTON — Democrats’ strategy to begin a Senate debate on voting rights began to crumble Thursday when two key moderates reiterated their support for keeping the filibuster, another Democrat quarantined with COVID-19 and President Joe Biden expressed doubt that landmark legislation would land on his desk anytime soon.

A day that began with momentum for Senate Democrats soon devolved into another day of disappointment as the chamber barreled toward a self-imposed Jan. 17 deadline to pass two measures — the Freedom to Vote Act and the John R. Lewis Voting Rights Advancement Act — even if that meant they’d have to change long-standing filibuster rules to do so.

But by the end of the day, it appeared Democrats lacked the votes to accomplish either.

Ahead of a Biden visit to Capitol Hill to rally Democrats, centrist Sen. Kyrsten Sinema, D-Ariz., reiterated her longstanding support for the 60-vote threshold to pass legislation and her opposition to Democrats’ efforts to weaken it.

“While I continue to support these (voting rights) bills,” Sinema said in a 20-minute floor speech, “I will not support separate actions that would worsen the underlying disease of division infecting our country.”

Senate Minority Leader Mitch McConnell, R-Ky., who has led Republican opposition to the bills and to efforts to abandon the filibuster, said Sinema “saved the Senate as an institution.”

Biden left the meeting with Democrats unconvinced that he had swayed Sinema and Sen. Joe Manchin III, D-W.Va., another key moderate.

Later Thursday, Manchin issued a statement reiterating his opposition to eliminating or weakening the filibuster.

Also complicating the timetable was news Thursday that Sen. Brian Schatz, D-Hawaii, was quarantining after he tested positive for COVID-19, despite being vaccinated and boosted. It was unclear how that might impact the voting schedule.

Speaker of the House Nancy Pelosi announced Tuesday she will run for another term, ending months of speculation about whether the 81-year-old would retire.

“Our democracy is at risk,” the California Democrat said in a...Read More

ATLANTA — A Republican state senator has filed legislation to fight a decision by the U.S. Food and Drug Administration allowing those with a prescription to obtain the abortion pill through the mail.

WASHINGTON — About one in eight congressional staffers are not making a living wage, according to a new analysis of payroll data.

The problem is particularly acute for staff assistants, who are often the most junior ...Read More

WASHINGTON — Democratic U.S. Rep. Jim Cooper, who has served in the House for more than 32 years, announced his retirement Tuesday, hours after Republican lawmakers in Tennessee approved a redistricting plan that carves ...Read More

CHICAGO — Nearly 10,000 women traveled from out of state to have an abortion in Illinois in 2020, a roughly 29% increase compared with the previous year, according to the most recent Illinois Department of Public Health ...Read More

When he was running for president in 1999, George W. Bush, then governor of Texas, famously fended off the strong anti-abortion wing of his party by suggesting the country ought not consider banning abortion until public ...Read More