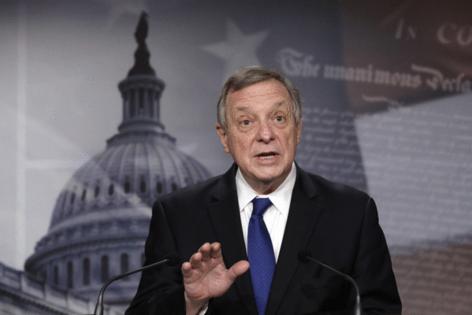 WASHINGTON — Senate Democrats are signaling a new willingness to consider how to get around a potentially adverse ruling by a key Senate official on whether they can include immigration policy in their social spending and climate bill.

Senate Parliamentarian Elizabeth MacDonough is expected to rule shortly on whether Democrats’ third immigration proposal — which would provide work permits and deportation protection to immigrants in the country illegally — conforms with Senate rules required to pass the package. She rejected two earlier immigration provisions.

Senate Majority Whip Richard J. Durbin (D-Ill.), a longtime proponent of immigration reform, said he would support overruling the parliamentarian if she rules against their latest proposal.

“I’d vote for that,” Durbin said in a brief interview. “I hope it doesn’t come to that.”

Overruling the parliamentarian has been considered a long shot because it would be a significant change in Senate custom and precedent. In recent weeks, Durbin repeatedly called the idea unrealistic and downplayed the idea.

“I’m still downplaying it,” he said. “I hope we get a good ruling from the parliamentarian, but I won’t rule it out.”

As the prospect of enacting a once-in-a-generation bill without any meaningful immigration policy comes into closer view, some Democrats are looking at the issue anew. “These chances don’t happen very often,” Durbin said.

Disregarding the parliamentarian’s decision would require, at minimum, the support of all 48 Senate Democrats and the two independents who caucus with them. Durbin, who is responsible for keeping track of Democratic votes, said he didn’t know if he’d get 50 on the issue, but said his gut instinct is that it is “close.”

“We don’t know until it is tested,” he said.

Still, Sen. Joe Manchin III (D-W.Va.), the most conservative Democrat in the chamber, is adamantly opposed.