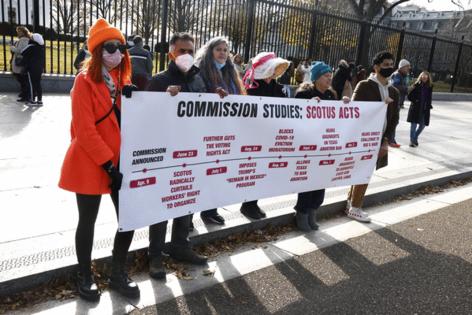 Now Biden’s time is up, the court is considering a rollback on abortion and a broadening of gun rights, and those calls are only getting louder.

The panel on Tuesday unanimously approved a draft final report that, by design, makes no recommendations on the kind of fundamental changes liberals say are needed. Its completion means that Biden will face renewed pressure to try to neutralize the conservative-dominated court and its ambitious agenda, though it’s far from clear the president will yield to it.

“If President Biden wants to be taken seriously on this issue, he needs to put forward serious structural reforms,” said Sarah Lipton-Lubet, executive director of the liberal group Take Back the Court. “It’s been clear from the start that the commission wasn’t going to produce anything actionable. It’s equally clear that it simply cannot be the administration’s actual response to the crisis we’re facing.”

The commission’s report takes no position on demands for expanding the court, establishing judicial term limits and curbing the high court’s power to invalidate legislation. It lays out pros and cons of some of those suggestions and discusses whether laws or constitutional amendments would be required to make those changes. The report does endorse the continued livestreaming of oral arguments and the adoption of an advisory ethics code for the justices.

The commission vote came less than a week after Supreme Court arguments in a Mississippi case indicated the justices are seriously contemplating overturning Roe v. Wade, the 1973 ruling that legalized abortion nationwide.

The abortion argument increased the appetite among Senate Democrats for major changes to the court, said Senator Sheldon Whitehouse, a Rhode Island Democrat. He says he expects a decision overturning Roe would prompt lawmakers to act.

“It would be the straw that broke the camel’s back after an enormous cascade of other terrible political decisions by the court,” Whitehouse said in an interview. He has been sharply critical of the court in recent years, saying conservative “dark money” is producing partisan rulings.

Still, Whitehouse himself isn’t calling for Congress to add seats to the court. “I’m very hesitant to get out ahead of my skis in that regard,” he said.

Before Ketanji Brown Jackson was one of the front-runners for a U.S. Supreme Court nomination, she was a speech and debate superstar at Miami Palmetto Senior High School.

Justice Stephen G. Breyer has made many rulings during a long and distinguished career, but his most consequential may turn out to be the one reported Tuesday: He will retire from the U.S. Supreme Court at the end of its ...Read More