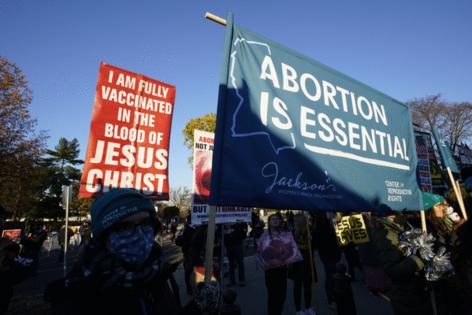 Justices on Dec. 1 took up a Mississippi law that prohibits abortion after 15 weeks of pregnancy. During the arguments, the court's conservative justices appeared open to upholding the state's law. There also seemed to be some support for rescinding Roe v. Wade and Planned Parenthood v. Casey, which reaffirmed Roe's earlier decision. A decision is expected around June.

Texas' new abortion law effectively bans abortions after about six weeks. But during the same session lawmakers also passed what's often called a "trigger" law in which abortion would be banned if the Roe or Casey rulings were overturned, "wholly or partly." The law would go into effect 30 days after the decision. Those who perform an abortion could face up to 20 years in prison and up to life if "an unborn child dies as a result of the offense."

"The goal of this bill is to end the practice of abortion in Texas," said Rep. Giovanni Capriglione, a Southlake Republican who authored House Bill 1280.

The bill provides an exception if the patient is in a "life-threatening physical condition" related to a pregnancy that puts the patient at "risk of death or poses a serious risk of substantial impairment of a major bodily function."

Capriglione thinks the court is poised to overturn Roe and leave abortion regulations up to states. The bill he authored would allow for rules to be in place without the Legislature again meeting, he said.

Capriglione described the law as conforming to whatever the court ultimately rules.

But legal experts have raised questions about how the law would be carried out if Roe or Casey "partly" were overturned.

"The text of the statute has to tell you how it would be applied, and it just doesn't, right?" said University of Texas Austin law professor Elizabeth Sepper. "It doesn't provide a measure of clarity."