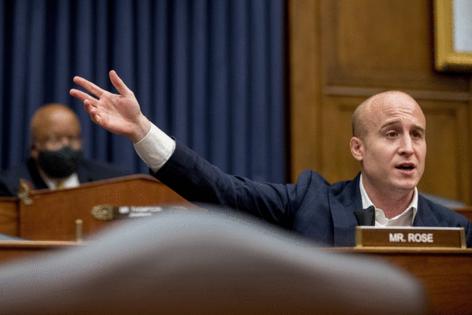 His announcement comes as Republicans picked up ground locally in November’s elections — with the GOP gaining two seats in the City Council for a total of five and Republicans picking up both the county executive and district attorney posts in Nassau County.

“The alarm bells, they never stop ringing. And the people we trusted to fix it, they divide us, they lie to us, tearing America apart just to hold on to power,” Rose says in the video. “You look at all that, and it’s easy to think that maybe our best days are behind us, that nothing will change. Well, I disagree.”

Rose, a moderate Democrat and decorated Army veteran, will likely face an uphill battle as he tries to wrest control of the Staten Island and southwestern Brooklyn district, which is populated by more Republicans than any other in the city. In last year’s election, Malliotakis beat Rose by 6%, but the district’s boundaries are now being redrawn by the state legislature, which could give Rose a boost.

In his video, he is clearly attempting to appeal to both Republican and Democratic voters. The inclusion of de Blasio, who’s unpopular on much of Staten Island, signals that he’s once again running as a centrist. And, with his inclusion of the Capitol riot — which former President Donald Trump is accused of inciting — he does not exactly pander to Trump supporters, either.

Malliotakis, on the other hand, voted against certifying the results of the 2020 election, which Trump falsely and repeatedly has claimed was stolen from him.

“Our politics can lift us up rather than tear us down,” Rose says as his video concludes. “The American we believe in is possible. A just America, a safe America, our America. All we need are leaders willing to risk everything to do what’s right.”