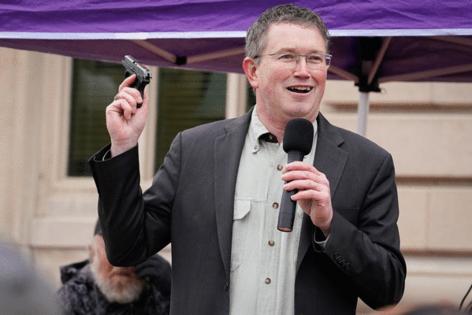 Kentucky Congressman Thomas Massie posted his family’s Christmas card on Twitter Saturday. In that photo, all seven family members are brandishing high-powered weapons, including the family patriarch, who is grinning while holding what appears to be an M-60 machine gun.

That didn’t sit well with a lot of people, including parent Fred Guttenberg, whose daughter Jamie was one of 17 people shot dead during the 2018 mass shooting at Marjory Stoneman Douglas High School in Parkland, Florida.

“@RepThomasMassie, since we are sharing family photos, here are mine,” Guttenberg wrote to the lawmaker. “One is the last photo that I ever took of Jaime, the other is where she is buried because of the Parkland school shooting.”

Jamie Guttenberg was 14 when she was killed in her school’s hallway. She was an honor student who wanted to be a pediatric physical therapist.

“The Michigan school shooter and his family used to take photos like yours as well,” her grieving father wrote in his message to Massie.

Ethan Crumbley, 15, was charged with murder on Nov. 30 after allegedly bringing a handgun to school and opening fire in suburban Detroit. His parents, who gave him the firearm as an early Christmas present, were arrested Saturday and charged with manslaughter. They have pleaded not guilty.

Guttenberg wasn’t alone in unloading on the Massie family on Twitter. Several social media users found irony in posing with weapons of war on a greeting card celebrating a holiday Christians typically associate with goodwill. Others expressed pity for the Massie family.

“This makes you look so very frightened,” tweeted writer Jill Hamilton. “I feel sorry for you.”