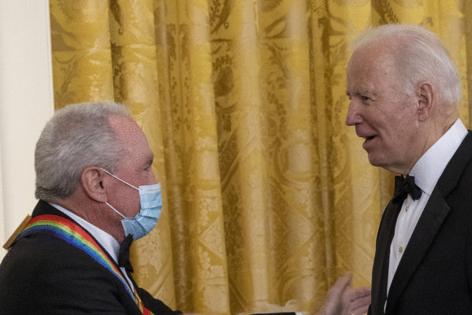 “You are in a sense the face of America,” Biden said. “You’re the ones that most people associate with who we are as a country.”

He praised “Saturday Night Live,” which made its debut on NBC in 1975, for decades of political satire that Biden said is evidence of “the power of our example” as a democracy.

“Throughout my career, I’ve met nearly every world leader,” he said. “I’ll tell you, not everyone sees satire that way. You’d all be in jail — joke. But really, all kidding aside, think about it.”

Midler, 76, finds joy that captures audiences and gives them “a little bit of hope,” Biden said.

Following the reception, the president, first lady and honorees were headed to the Kennedy Center’s Opera House for a performance honoring the nominees. Celebrities including a number of current and former SNL cast members were spotted in Washington this weekend and were expected to participate.

Trump skipped the ceremony at the Kennedy Center in 2017 after two honorees — television writer and producer Norman Lear and dancer Carmen de Lavallade — said they planned to skip the reception at the White House because of political disagreements with the president.

Trump again opted against attending in 2018, when prominent critic Cher was being awarded, and in 2019, when the show “Sesame Street” was recognized. That came a year after Trump proposed zeroing out federal funding for the Corporation for Public Broadcasting in his annual budget.

In 2020, the Kennedy Center postponed the event due to the coronavirus pandemic.