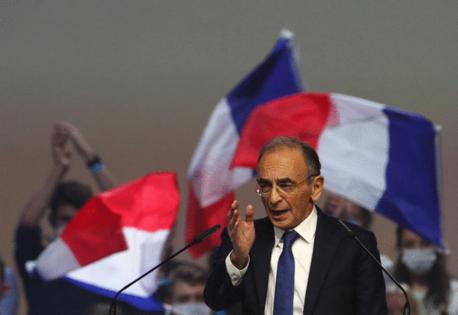 French far-right television pundit Eric Zemmour’s first political rally since declaring his candidacy for president was marred by fighting involving dozens of people within the venue, violence that underlines the divisiveness of his campaign.

Television footage of the event shown on BFM on Sunday showed a man lunging at Zemmour as he made his way to the stage through crowds and heavy security at the conference center in Villepinte outside Paris. A fight also broke out between protesters in black T-shirts and supporters, with at least one person emerging bleeding from the head.

Zemmour, a populist firebrand who has been compared with Donald Trump, used his speech to revisit many of his favorite themes of immigration and the steady decline of France over the past decades. He accused the media and political detractors of hostility and unfairly snooping into his personal life.

“We are fighting so our people will once again be admired and respected,” Zemmour said, pledging to pull France out of NATO, raise workers’ salaries and protect the country’s family-owned companies to prevent them from being sold off to Chinese or U.S. businesses.

Zemmour also urged French mayors to give him the necessary signatures of support for his candidacy that are required under the country’s elections laws.

“Don’t let this election be stolen,” he said.

He also vowed to shut the country’s borders to immigration and overhaul the education system to stop the teaching of “inclusiveness.”

France’s election campaign is gathering steam after Valerie Pecresse won the final round of the conservative Republican’s ballot on Saturday. An adviser to President Emmanuel Macron’s government said recently that Pecresse could pose a serious threat to his re-election.