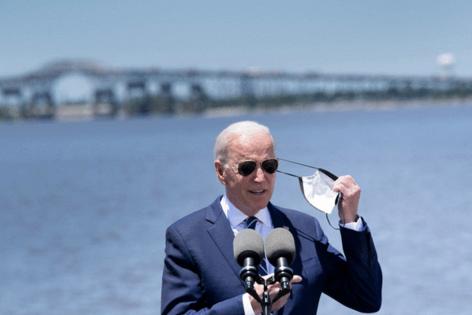 WASHINGTON — President Joe Biden will travel to the Kansas City area on Wednesday, according to White House officials, in a visit that comes as he continues to promote his new infrastructure law and build support for a federal social spending proposal.

The White House did not immediately announce the exact location of the visit — Biden’s first to the metro area as president. He was last in Kansas City in March 2020 as he campaigned for the Democratic presidential nomination.

Kansas City — a Democratic-leaning metro area sandwiched between two conservative states — is represented in Congress by Emanuel Cleaver on the Missouri side and Sharice Davids on the Kansas side. Both Democrats have been vocal supporters of the infrastructure law, along with Kansas City Mayor Quinton Lucas, who attended the White House bill signing ceremony last month.

“We are excited to welcome President Biden to Kansas City this week, as we share how the President’s infrastructure program will help rebuild our roads, bridges, and sewers, expand our transit system, enhance our environment, and will create more good-paying jobs for Missourians,” Lucas said in a tweet.

Davids likely faces a competitive reelection fight next year against Republican businesswoman Amanda Adkins, a rematch of the 2020 race. Davids was the only member of Kansas’s congressional delegation to vote for the infrastructure package and she has held multiple events and issued several statements touting the bipartisan law.

As recently as Friday, Davids was drawing attention to an announcement by the Environmental Protection Agency that Kansas would receive more than $79 million under the bill to improve water and wastewater systems.

Cleaver has a strong grip on his district, but some Missouri Republicans have discussed whether the General Assembly could redraw the boundaries of his congressional district to make it more competitive.

Biden’s infrastructure law hands Democrats in tough races a policy victory to campaign on in next year’s midterm elections. Biden’s party currently holds a slim majority of seats in the House and the Senate and any losses threaten Democratic control.

Incumbent legislators in competitive congressional contests across the country often perform poorly in midterm elections when they are from the same political party as the president. Biden is hoping to turn the trend around, against historical odds and political headwinds, including the continued spread of COVID-19 and frustration over inflation.

Biden’s wife, Jill, has already been to the Kansas City area twice as first lady, visiting a college vaccination clinic in May in Kansas City and an early childhood education center in Kansas City, Kansas, in October.