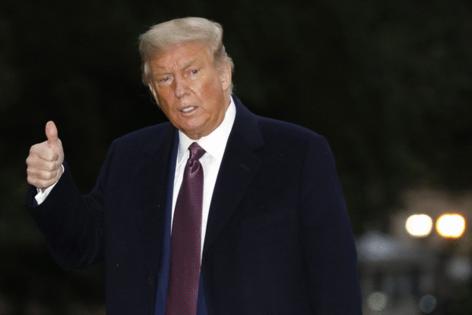 Trump first announced the plan to merge with the so-called blank-check firm in October that would help enable him to regain a social media presence after he was kicked off Twitter Inc. and Facebook Inc. platforms. The new enterprise will be in operation by the first quarter of 2022 and plans to start a social media company called Truth Social.

A SPAC is special-purpose acquisition company, sometimes referred to as a shell company, for the purpose of acquisitions or mergers.

The transaction will provide about $1.25 billion of proceeds to fund the operations of the combined entity, Trump Media & Technology Group Corp. said in the joint release Saturday, with the price conversion ratio adjusted based on the share performance of Digital World.

“$1 billion sends an important message to Big Tech,” Trump said in the statement, adding to earlier accusations of censorship and political discrimination. “As our balance sheet expands, TMTG will be in a stronger position to fight back against the tyranny of Big Tech.”

Bloomberg columnist Matt Levine said this week that Trump’s company hasn’t provided updates on its financials, operations and plans, and that the deal with Digital World has yet to close or file any proxy statements.

Pointing to the math for the transaction, Levine said Trump is “gonna get his money” because “retail investors and Trump political allies will pay $44 for the right to give Trump $10.”

Still, some investors have already gained from the planned deal.

The fund got a big boost from its stake in Digital World following the announcement with Trump’s company. Yakira was the best performer among 67 event-driven funds tracked by industry research firm BarclayHedge. The fund’s returns were twice as high as the next best performer in the category, said BarclayHedge President Sol Waksman.

Trump, who has teased that he might run again in 2024 without making any formal announcement, has been banned by major social-media companies for his role in encouraging supporters who broke into the U.S. Capitol on Jan. 6 as both houses of Congress were meeting to certify Joe Biden’s victory in the 2020 presidential election.