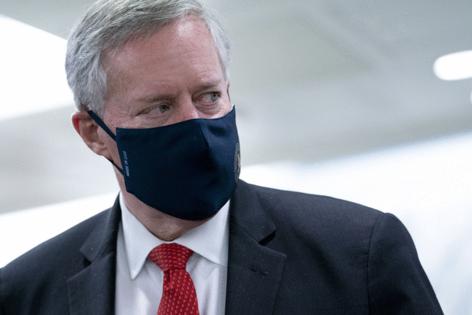 The famously mercurial Trump has derided Meadows in conversations with friends since the ex-White House chief of staff revealed the previously unknown test result in a book excerpt, CNN reported late Thursday.

Trump objects to Meadows’ disclosure about the positive COVID-19 test because it suggests he was likely infected with the deadly virus when he took the stage with Biden in Cleveland for a controversial and shambolic debate.

“The story of me having COVID prior to, or during, the first debate is Fake News,” Trump said Wednesday in an email statement.

The former president also showed up late to avoid undergoing a mandatory pre-debate COVID-19 test, a gambit that he apparently carried out because he feared a positive result.

Trump and Meadows stressed that he took a second test that came back negative shortly after the positive one on the weekend before the debate.

Some have portrayed the book excerpt as a sign Meadows may be breaking from Trump, especially since it was also revealed this week that he has agreed to give some testimony to the congressional committee probing the Jan. 6 attack on the Capitol.

But Meadows sought to contain the damage from the report, which was based on an excerpt from his upcoming White House memoir.

He called the controversial test result on his ex-boss a “false positive,” citing two negative test results that he claimed came soon afterward.

“It’s fake news. If you actually read the book ... that story outlined a false positive,” the former chief of staff said on the right-wing Newsmax network.

“Literally had a test, had two other tests after that that showed that he didn’t have COVID during the debate,” Meadows added.

Despite his questionable assertion that Trump was not suffering from COVID-19 during the debate, Meadows admits in the book that Trump looked under the weather on the evening of the event. He did not address Trump’s deliberate avoidance of the pre-debate test.

Two days after the debate, Trump again tested positive for COVID-19. That time, the president was too sick to cover up the test and it was quickly revealed to the public.

A day after that, he was airlifted to Walter Reed hospital in what doctors later admitted was a life-threatening case of COVID-19. Given the typical progression of COVID-19, Trump almost certainly was suffering from the disease during the debate, contrary to his and Meadows’ claims.