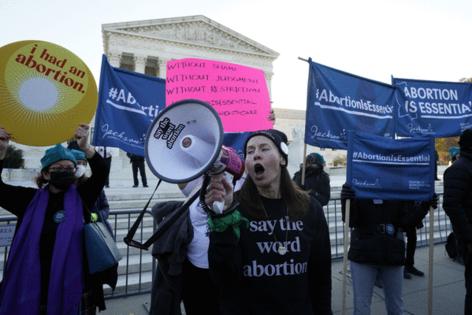 WASHINGTON — As Democrats seek to turn the political tide less than one year out from the midterm elections, they are increasingly leaning into the volatile issue of abortion, with the Roe v. Wade decision hanging in the balance at the U.S. Supreme Court.

The high court heard oral arguments Wednesday to a challenge of a Mississippi law that bans most abortions after 15 weeks, which directly confronts the landmark 1973 ruling that legalized abortion nationwide. Justices could issue a decision on the case next summer, just months before the 2022 elections.

While the economy and coronavirus pandemic are currently at the forefront of voters’ minds, Democrats and their liberal allies say a complete or partial overturning of Roe v. Wade could fundamentally alter the political equation, giving them an opening to energize base voters — especially young women — and make inroads with swing suburban women.

As they wait for the Supreme Court to rule on the Mississippi law, in addition to a separate Texas law that bans most abortion after six weeks and allows private citizens to help enforce it, abortion rights advocates say they need to start sounding the alarm on the potential rollback of Roe v. Wade now to have an impact next November.

“As it becomes more inevitable and less hypothetical, this is going to be a huge force in the midterms,” said Kristin Ford, vice president for communication and research at NARAL Pro-Choice America. “We have work to do to have voters understand the gravity of the situation. Increasingly that will become very, very clear.”

Ford and others on the left say that many of the key voters they are targeting are not fully aware abortion rights are at risk, despite the recent activity at the Supreme Court. Polling and focus groups reveal that abortion ranks relatively low on voters’ priority lists.

In the Virginia governor’s race this fall, Democrat Terry McAuliffe campaigned heavily on the issue before narrowly losing to Republican Glenn Youngkin in a state that President Joe Biden carried by 10 points in 2020. Exit polls showed Youngkin winning among the small subgroup of voters who said abortion was their top concern.

But progressives say that dynamic will change if and when the Supreme Court issues rulings in the Mississippi and Texas cases, and when political campaigns kick into high gear. They argue public opinion is on their side: a recent Washington Post/ABC News poll found that 60% of Americans think the court should uphold Roe v. Wade, while 27% want the decision overturned.

Three Democratic-aligned groups — Planned Parenthood Action Fund, EMILY’s List, and American Bridge 21st Century — outlined in a polling memo this week how the party could use the issue to its advantage heading into the midterm elections.