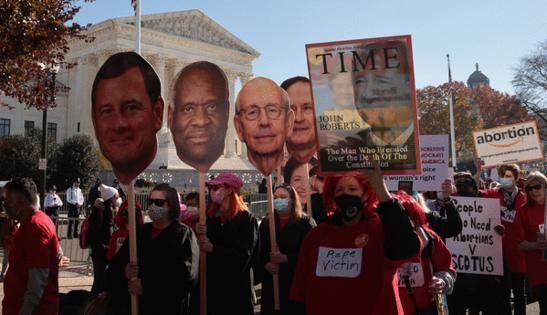 WASHINGTON — Democrats stand to gain a powerful campaign tool to gin up support just ahead of the 2022 congressional midterm elections, based on the possibility that the U.S. Supreme Court is poised to roll back abortion rights.

While abortion rights are a perennial issue in congressional campaigns, Democratic strategists say that the kind of major shift to restrict access signaled by the court’s conservative majority in a case argued Wednesday would spur their base voters to turn out while moving swing voters away from the Republican Party.

A court ruling is expected by the summer, giving Democrats a powerful pitch to raise money and recruit campaign volunteers as they head into the final stretch before the November elections.

If the issue tipped the balance in even a few races, it could determine control of Congress, where Democrats currently have an eight-seat margin in the House and control the Senate only because of Vice President Kamala Harris’s tie-breaking vote.

Chris Hayden, a spokesman for the Democratic Congressional Campaign Committee, said that Republicans are in a bind because their base wants the Supreme Court to overturn Roe v. Wade, the 1973 ruling legalizing abortion.

“If they have the Supreme Court and they still can’t get it done, that’s going to be a real problem for them,” he said.

Both parties are vying for suburban female voters. Recent gubernatorial elections in Virginia and New Jersey showed that Democrats have lost ground with that bloc, after making gains during President Donald Trump’s administration.

Republicans are currently favored to win back control of at least one chamber due to a combination of gains made from redistricting, President Joe Biden’s low approval ratings and the historical trend of the party in power losing in midterms.

Democratic strategists say that a major court ruling would immediately become a top issue, pointing to polls that show the majority of Americans support the abortion rights recognized in Roe and reaffirmed in 1992.

A recent survey by the DCCC found that the message that Republican candidates would seek to ban abortion was their strongest line of attack, followed by criticizing them for potentially blocking the debt ceiling and opposing letting Medicare negotiate cheaper prices on prescription drugs.