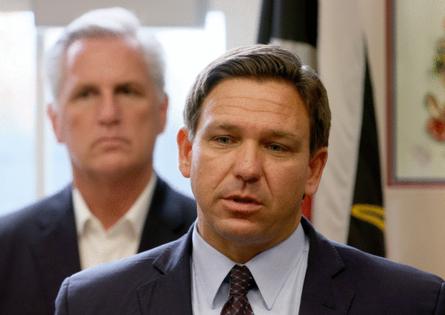 He also hasn’t proposed anything to combat the tactic.

That’s led Democrats to suspect his motives in pushing the election crimes crackdown, a legislative proposal that includes increasing the penalty for ballot harvesting, requiring more frequent clean up of voter rolls and eliminating the use of unsecure drop boxes.

“It seems completely politically motivated,” said Rep. Anna Eskamani, D-Orlando. “Governor Ron DeSantis wants to set himself up to be president in 2024 and part of that means going along with some of this extreme rhetoric around election fraud that isn’t accurate.”

Florida election laws are relatively lax. If there’s no criminal investigation, a complaint can be made to the Florida Elections Commission, but the panel can take several months or more than a year to investigate and suggest a punishment, usually a small fine.

Alex Rodriguez and the two other candidates ran as independents but dark money groups funded mailers touting typically Democratic issues. Rodriguez was paid $44,000 by former Sen. Frank Artiles, a Miami Republican, to put his name up for the election.

He was charged with a crime and later agreed to a deal with prosecutors, pleading guilty to accepting illegal campaign contributions and lying on campaign documents. He will receive one year of house arrest and three years probation in return for testifying against Artiles, whose case remains pending.

In October the Florida Elections Commission recommended Rodriguez be censured and fined $20,000, which was $24,000 less than he was paid to put his name on the ballot.

It’s up to DeSantis, though, to determine whether the recommendation should be carried out, and he hasn’t yet made a decision. His spokeswoman, Christina Pushaw, said his office must work through previous FEC recommendations first.