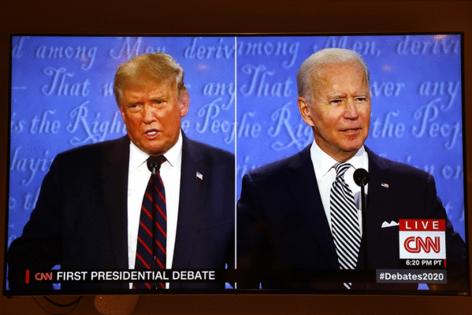 Mark Meadows, the former White House chief of staff, says in his forthcoming memoir that Trump tested positive for the deadly virus the weekend before the debate but then also tested negative soon afterward, the Guardian reported Wednesday.

Trump refused to tell the American people about the positive test and the then-president and his relatives infamously refused to undergo COVID testing on the day of the debate in Cleveland.

”Nothing was going to stop (Trump) from going out there (for the debate),” Meadows writes in the book, titled "The Chief’s Chief."

Trump did not deny the report that he tested positive for COVID but derided it as “fake news” anyway.

“The story of me having COVID prior to, or during, the first debate is Fake News,” Trump said in an email statement. “In fact, a test revealed that I did not have COVID prior to the debate.”

The Guardian said it obtained the Meadows book Tuesday, the same day he reached a deal to testify before the congressional committee investigating the storming of the Capitol on Jan. 6.

Despite the damaging revelations in the upcoming book and the agreement with the committee, there is no sign that Meadows has broken ranks with his ex-boss.

Meadows concedes in the book that Trump was displaying possible symptoms of COVID before, during and after receiving the mixed test results.

“Stop the president from leaving,” Conley told Meadows, according to the book.

When the second test came back negative, Trump decided to continue with the rally, where few wore masks or took any precautions against spreading the deadly virus.

“I didn’t want to take any unnecessary risks,” Meadows writes in the book, a claim that is certain to provoke widespread fierce criticism and ridicule. “But I also didn’t want to alarm the public if there was nothing to worry about.”

On the afternoon of the debate three days later, Meadows writes that Trump looked “slightly” better but was obviously not well.

“The dark circles under his eyes had deepened,” Meadows writes. “I could tell that he was moving more slowly than usual. He walked like he was carrying a little extra weight on his back.”

Two days later, Trump again tested positive for COVID and by then was suffering much clearer symptoms. Unlike the previous positive test, that result was revealed to the public within an hour.