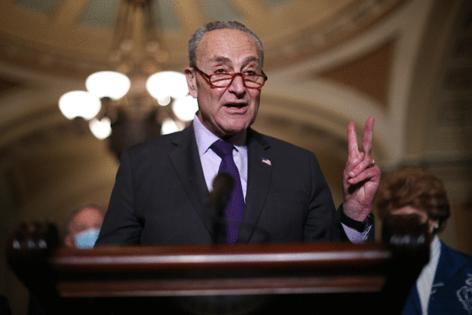 Democratic leaders in Congress are working around the clock to meet a new end-of-week deadline to avoid a government shutdown amid separate looming deadlines to avoid a disastrous national default, pass a defense bill and enact President Biden’s sprawling budget proposal.

The White House is trying to convince Congress and voters alike that the recently approved infrastructure package — containing money for roads, bridges, broadband, water systems and a shift to electrical vehicles — is evidence that Biden can work across the political aisle. The measure passed with solid Republican support.

But first things first: the House of Representatives and Senate must pass a short-term spending bill by the weekend, or the federal government will run out of money, triggering at least a partial shutdown.

Even if Democrats can convince all their members in the nearly evenly divided bodies to go along with that plan, they still face several vexing issues that will need to be resolved within just days.

For one thing, the Senate needs to approve the National Defense Appropriations Act, a massive must-pass bill that sets military policy and even more importantly, allows the troops to be paid in full and on time.

Republicans have flexed their muscle to demand votes on scores of amendments, some of which are sure to fail but are designed to give electoral black eyes to some vulnerable Democrats.

Majority Leader Sen. Chuck Schumer (D-N.Y.) blasted GOP leaders for blocking consideration of the bill, noting that Democrats were only allowed votes on a handful of amendments when Republicans were in charge.

“The Republican choice to block our bill — and by extension legislation to support our troops and protect the homeland — can be summed up in two words: inexplicable and outrageous,” Schumer said in a statement.

After the defense bill and the stopgap spending measure, the next crisis on the horizon is another fight over raising the debt ceiling.

Senate Minority Leader Mitch McConnell (R-Ky.) forced a damaging showdown on the issue in October but eventually blinked by allowing Democrats to kick the can down the road.

Treasury Secretary Janet Yellen has repeatedly urged Congress to raise the nation’s borrowing limit and warned that without an increase in the debt ceiling, the government could default on its debt obligations for the first time soon after Dec. 15.

“I cannot overstate how critical it is that Congress address this issue,” she said. “America must pay its bills on time and in full. If we do not, we will eviscerate our current recovery.

Democrats passed a version of the bill in the House but still need to win the support of Senate moderates, especially Sen. Joe Manchin (D-W.Va.) to send it to the White House for the president’s signature. That process is likely to involve another brutal round of intramural Democratic political horse-trading, although the smart money says Biden gets his legacy-defining bill passed in the end.

Sen. Tim Kaine (D-Va.), a friend of Manchin, suggested the kingmaker would “not be an obstacle” to approving some version of the bill.