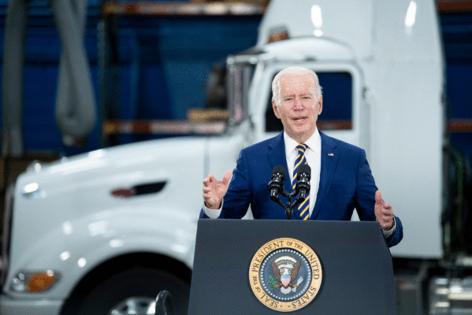 Speaking at Dakota County Technical College in Rosemount, Biden said he and others in his administration will travel around the country in the coming weeks to highlight how "these investments will change lives." The president said the law "will help rebuild the backbone of this nation," including making high-speed internet available to every Minnesotan.

Biden, a Democrat, signed the legislation into law earlier this month that will bring billions to Minnesota. Prior to the president's remarks, Minnesota Gov. Tim Walz called the infrastructure bill "one of the most important pieces of legislation" Congress has passed in the last several decades.

Former Democratic New Orleans mayor Mitch Landrieu, recently picked by Biden as senior advisor and infrastructure coordinator, said in a phone interview that Minnesota has "661 bridges and over 4,000 plus miles of highway in poor condition and some of the funding that's coming down to you guys should be coming down sooner rather than later."

Hundreds of people gathered across from Dakota County Technical College to protest Biden's visit, ranging from supporters of former President Donald Trump to Ethiopians on all sides of the country's civil war asking the president to re-examine his foreign policy in Ethiopia.

Rosemount is in the Second Congressional District represented by U.S. Rep. Angie Craig. The Democratic congresswoman is expected to face a heated re-election battle next year as her party tries to keep control of the House and Senate in the 2022 midterm elections.

Craig welcomed the president to her district, adding that the event "demonstrates that we're working tirelessly to make good on our promises, and that we're committed to working on a bipartisan basis to get it done."

Republican Tyler Kistner, who failed to unseat Craig in the 2020 election and is running again to try to oust her next year, said in a statement that "the Democrats know Angie Craig is in serious jeopardy of losing her seat in 2022 and are using their deeply flawed infrastructure legislation as an excuse to bring Joe Biden in to save Craig's floundering political career."

Biden won Dakota County by almost 14 percentage points, and carried the state in the 2020 presidential election.

"A little over one year ago, Minnesotans voted for President Biden in the hope he could break through the partisan nonsense in D.C. and get things done. Despite being in office for less than a year, President Biden has already delivered for Minnesotans everywhere," DFL Party Chairman Ken Martin said ahead of Biden's visit.

Minnesota Republican leaders criticized Biden and his party in a zoom call Tuesday morning over issues including inflation, energy, the border and Democrats' legislative goals on Capitol Hill.

"No question, he's here to try to shore up the faltering campaigns of Angie Craig and Gov. Walz," state Republican Party Chairman David Hann said on the call. "But I think the fact that they are choosing to link themselves so closely to the failed policies of the Biden presidency are going to mean that for Minnesotans, they're going to have a clear choice next year."

While there was criticism of the bipartisan infrastructure law, which Minnesota's four U.S. House Republicans voted against, much of the call blasted Biden on other topics.

"I think Democrats have really ran into a problem and see that you can throw all the money in the world at infrastructure," said state Senate deputy majority leader Mark Johnson, R-East Grand Forks. "But if you don't have the workers there, the workforce, we really need to be looking at how we can build back our trades and our workforce across the state."