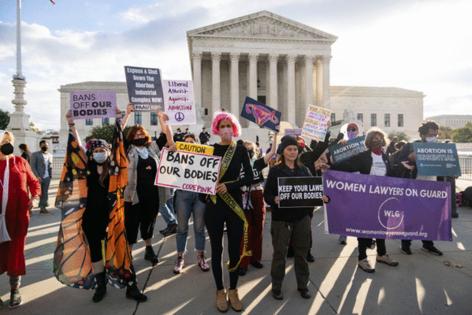 WASHINGTON — The Supreme Court hears arguments Wednesday in a case that asks the justices to overturn the long-standing decisions that established the right to abortion in the United States, a moment that Republican politicians, conservative legal groups and anti-abortion activists have worked for decades to deliver.

The 1973 landmark decision in Roe v. Wade that first legalized abortion also helped spark that movement, which has become a steady theme in partisan politics and the Senate’s most recent history of contentious Supreme Court confirmation hearings.

Then-Majority Leader Mitch McConnell and Republicans rushed ahead of the 2020 presidential election to confirm Amy Coney Barrett, the last of then-President Donald Trump’s three appointments to the high court, to give conservatives what appears to be a solid anti-abortion majority on that bench.

Now, what those justices say Wednesday in a challenge to a Mississippi abortion law could reveal how far and how fast the new 6-3 conservative majority will change the legal landscape for abortion — and possibly even eliminate the right for nearly half the women in the United States of reproductive age, mostly in swaths across the South and Midwest.

“For the first time in eight decades or so, we have six conservative justices on the court,” Josh Blackman, a constitutional law professor at the South Texas College of Law Houston, said. “And this case is a gut check to see where those justices are.”

Ilya Shapiro, vice president of the Cato Institute, a libertarian think tank, called the Mississippi case “sort of the put up or shut up moment” for the conservative legal effort, which developed legal theories such as originalism and textualism, gave rise to conservative justices such as Clarence Thomas and the late Antonin Scalia, and grew the right-leaning Federalist Society.

That push included installing “a pipeline of lawyers and eventually judges to take back the courts from the liberal activism” of the 1960s and 1970s, Shapiro said, and the Mississippi case, with Trump’s appointees, “will show whether there’s a payoff for this decadeslong effort.”

At issue in the case is a Mississippi law that bans abortions after 15 weeks of pregnancy, which is before the fetus could survive outside the womb on its own, known as viability, which generally is considered to be around 24 weeks. There is little disagreement that the law violates Roe, in which the Supreme Court ruled that states could not enact laws to ban abortions before viability of the fetus.

The Supreme Court under Chief Justice John G. Roberts Jr. often has tended to look for a compromise position that avoids sharply divided 5-4 decisions, an approach that moves the law in a conservative direction incrementally rather than in large steps. But many legal experts see little middle ground in this case when it comes to viability, and his vote is not as central with five other conservatives on the court.