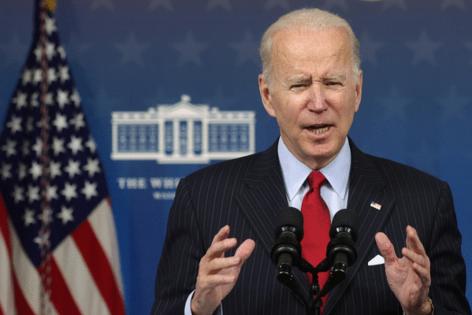 WASHINGTON — President Joe Biden is racing to show Americans that his administration is prepared for the omicron variant even though scientists have yet to determine how dangerous it could be or how it might alter the course of the pandemic.

He received another briefing from his COVID-19 team on Monday, his second in two days, and he’s scheduled to speak from the Roosevelt Room of the White House. Later in the week, he’s expected to visit the National Institutes of Health, headquartered just outside of Washington, D.C.

The swiftness of Biden’s public response to omicron, which was first identified by South Africa last week, reflects the potential danger posed by the variant to the country and his administration, which has already struggled to bring the lingering pandemic to a close.

However, much about omicron remains unclear. Although there are fears that it will prove highly contagious or evade protection from vaccines that have already been developed, public health officials said it could take two weeks to develop clearer answers to those questions.

“The challenge is in conveying uncertainty in unanswered questions without engendering panic among policymakers,” said Dr. Amesh Adalja, a senior scholar at the Johns Hopkins Center for Health Security. “That is a very nuanced and difficult message to convey.”

He criticized the administration for announcing a ban on international visitors from South Africa and other nations in the region, describing the policy “as porous, ineffectual and punishing towards countries that were adept at identifying and alerting the world to this variant.”

Omicron cases have already been identified in several countries, including Great Britain and Canada, but not yet in the United States. However, it’s possible that the variant has already arrived undetected.

He encouraged people to continue getting vaccinated or receive booster doses.

“We don’t know exactly what’s going on with this variant, but I would assume, and I think it’s a reasonable assumption, that when you get vaccinated and boosted and your level [of antibodies] goes way up, you’re going to have some level of protection, at least against severe disease,” he said.

Fauci said people considering getting their shots should not wait for pharmaceutical companies to produce new versions of their vaccines to handle omicron, and he emphasized that it’s not clear if changes to vaccines will even be necessary.

Pfizer and Moderna, the leading producers of two-dose vaccines in the United States, have said modified vaccines could be developed in the coming months.

Omicron is the latest in a series of variants that have been identified over the course of the pandemic, not all of which have proved significant. The most damaging has been delta, which was originally detected in India and has become the dominant version of the coronavirus because it’s highly contagious.

Other variants, like gamma and beta, were labeled “variants of concern” by the World Health Organization but have not become household names.

WASHINGTON — U.S. Rep. Angie Craig is heading into her most difficult reelection fight yet, defending a suburban battleground district amid a formidable series of challenges burdening Democrats across the country