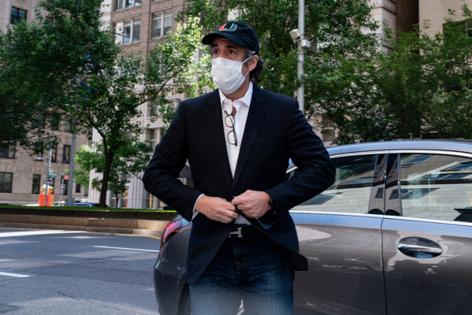 Cohen, fresh off a prison term for crimes related to his work for Trump, criticized the 45th president’s claims that the 2020 election was stolen from him in an appearance on NBC’s “Meet the Press.”

“One of the things Donald Trump has done is grift off of the big lie that the election was stolen from him in 2020,” Cohen said.

“It was not stolen from him. If he loses, which he will in 2024, what happens to the big lie? The big lie disappears,” he said.

Cohen did a little more than a year behind bars for committing campaign finance crimes and lying to Congress. He spent the rest of his three-year sentence, which ended last week, in home confinement.

Once serving as Trump’s loyal “fixer,” Cohen turned against the former president in early 2018, and he says he has been cooperating with the Manhattan district attorney’s investigation into the Trump Organization.

“I truly believe that they could indict Donald Trump tomorrow if they really wanted, and be successful,” Cohen said.

The panel is weighing whether to refer Meadows to the Department of Justice on contempt of Congress charges, the California Democrat told CNN’s “State of the Union.”

“I think we will probably make a decision this week on our course of conduct with that particular witness and maybe others,” Schiff said.

WASHINGTON — U.S. Rep. Angie Craig is heading into her most difficult reelection fight yet, defending a suburban battleground district amid a formidable series of challenges burdening Democrats across the country