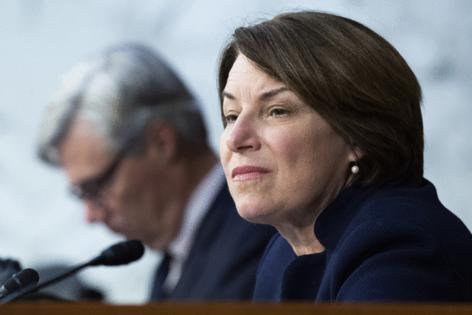 The vote of confidence by the Minnesota Democrat for the “Build Back Better” legislation was a rebuke to Sen. Joe Manchin, a moderate Democrat from West Virginia who has said the vote should wait until next year.

“Sen. Manchin is still at the negotiating table, talking to us every day,” Klobuchar told ABC’s “This Week.” “We can get this done. It’s — to me, it’s an old song.”

The legislation faces a tough path in the evenly divided Senate, where Republicans are unanimously opposed and moderate Democrats have been pushing for less spending.

Manchin has said he is opposed to a measure expanding the child tax credit. The senator from coal country has also voiced skepticism over its $550 billion in proposed clean-energy tax incentives.

Klobuchar reiterated some of the main Democratic talking points, such as the package’s proposed four weeks of paid family leave and a $400 billion preschool-for-all program.

“We’ve got workforce issues. And that’s why this ‘Build Back Better’ agenda is so important,” she said. “We need people ... to go into jobs where we have shortages.”

Republican Sen. Bill Cassidy of Louisiana, meanwhile, rattled off a list of conservative criticisms of the legislation.

“There’s corporate welfare. It’s going to raise the price of gasoline at least about 20 cents a gallon. And it begins to have federal dictates as to how your child’s preschool is handled, the curriculum even,” he told “This Week.”

Along with passing “Build Back Better,” Democrats are seeking to raise the country’s debt ceiling in the face of GOP opposition.

“You know, if the Republicans want to Scrooge out on us, and increase people’s interest rates and make it hard to make car payments — go ahead, make that case,” Klobuchar said. “We’re going to stop them from doing that.”