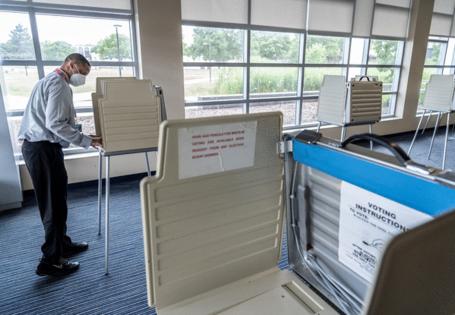 The infighting has played out on social media in recent weeks, culminating Tuesday with Jovan Hutton Pulitzer, a vocal critic nationally of the election and the author of books about treasure hunting, publicly criticizing Michigan Republican Party Co-Chairwoman Meshawn Maddock.

Pulitzer, whom a Michigan Senate committee previously accused of spreading false information, claimed Maddock and her husband, GOP state Rep. Matt Maddock, were involved in a scheme to take money from candidates in exchange for helping them get endorsements from former President Donald Trump.

"Michigan officials demand the payment (which we tracked down) and then you (Michigan GOPers) go to POTUS and say 'this is our guy,'" Pulitzer tweeted Tuesday. "That I have a problem with."

Meshawn Maddock fired back at Pulitzer on social media, asking if he was accusing Trump of "being paid off for endorsements."

"I just want to be sure before I give him a call," Maddock said referring to the former president.

For months, Republican activists have been unsuccessfully pushing for a "forensic" audit of the 2020 election in Michigan. Democrat Joe Biden won the state by 154,000 votes or 3 percentage points, a result that's been upheld by a series of court rulings, dozens of past audits and an investigation by the GOP-controlled state Senate Oversight Committee.

But those details have not deterred Trump and "forensic" audit supporters, who maintain there was widespread voter fraud.