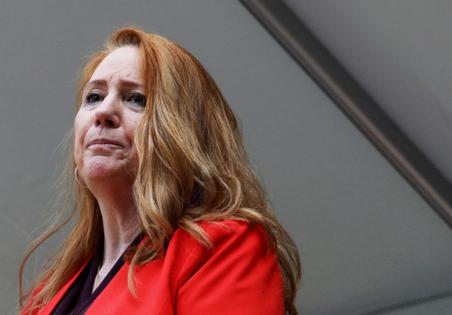 OLYMPIA, Wash. — Sitting in Washington's secretary of state's office in the Capitol on one of her last days of work, Kim Wyman shows off a trio of mantra bands on her wrist.

Made by a friend, one reads "remember why you started" to represent some of her turbulent battles as the state's chief election officer. A second one, for her battle with cancer, reads "choose joy."

"And 'make waves' was for the next journey," said Wyman of the third band, during a recent interview.

That next journey begins this week, as Wyman and her husband arrive in the other Washington for her new job: as a key election security official in President Joe Biden's administration.

With her oath of office taken, she'll serve as the senior election security lead for the Cybersecurity and Infrastructure Security Agency (CISA).

A branch of the U.S. Department of Homeland Security, CISA is central to efforts to protect voting systems from interference by foreign governments, and bad actors in general.

"The real draw, as corny as this may sound, is protecting and defending the Constitution," Wyman told The Seattle Times. "This is work that you get to do to protect our nation's election system, which is a constitutional pillar of our democracy and our republic.

"And I just want to make sure that we get through this really rough road that we've been on for a couple of years," she added.

Wyman is no stranger to CISA, which has a mission of working with state and local election officials to improve physical security and cybersecurity. Ever since the 2016 election — which culminated in Russia's interference — officials like Wyman have been working with CISA to shore up election security.

"She was with us, pushing us from day one, when I stepped in the door in 2018," said Matt Masterson, who held the election lead job until December 2020.

WASHINGTON — President Joe Biden may be on the verge of enacting a massive social spending plan that’s widely considered to be the crown jewel of his legislative agenda.

But the bill that he has expended much of his ...Read More

More than 30 Republican state lawmakers in North Carolina and South Carolina signed onto a new letter that backs false claims about the 2020 elections and pushes for the whole country to copy a widely discredited type of ...Read More

President Joe Biden hailed the guilty verdicts in the killing of Ahmaud Arbery on Wednesday afternoon but said the murder shows how far America has to go to achieve racial justice for all.

Kyle Rittenhouse, who was acquitted on charges stemming from killing two men and wounding another in Kenosha, Wisconsin, journeyed to Palm Beach, Florida, to meet with former President Donald Trump, who called the ...Read More