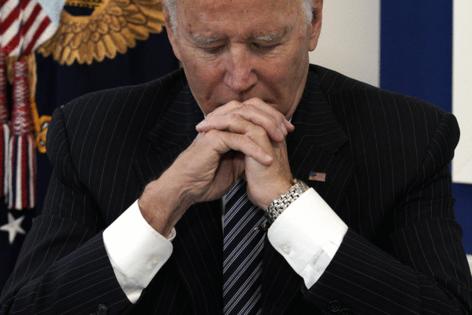 WASHINGTON — President Joe Biden may be on the verge of enacting a massive social spending plan that’s widely considered to be the crown jewel of his legislative agenda.

But the bill that he has expended much of his political capital on still might not be enough to motivate his party’s base.

As Biden nears the end of months-long congressional negotiations over a nearly $2 trillion budget bill, civil rights leaders and liberal activists are warning the president that he must also act on issues they say are urgent — especially voting rights — after he and the Democratic majority in Congress finish with spending legislation.

Absent progress there, dedicated Democrats— including many Black voters and grassroots progressives — won’t back the party’s candidates with the same level of energy as they did in recent campaigns during next year’s midterm elections, they say, no matter how many new climate and economic programs the president signs into law.

Those achievements are necessary, activists say, but not sufficient.

“I don’t know how I’m going to explain to Indivisible members across the country who spent five years of their life building this Democratic trifecta, with democracy on their mind, that we just didn’t get it done,” said Ezra Levin, co-founder of the progressive group Indivisible. “But then, please, knock on doors in 2022.”

The warning from Levin and other liberals strikes at a larger unknown for the White House. Will Biden’s legislative agenda — which also includes a $1.9 trillion pandemic relief measure and $1.2 trillion infrastructure investment the president signed into law — be enough to convince core Democratic voters to overlook stalled efforts on issues such as voting rights, police reform, gun control and immigration?

Many of the reforms advocates are pushing for in those policy areas would require at least 60 votes in an evenly divided Senate, which is unlikely, or unanimous support from the 50 senators who caucus with Democrats to end the legislative filibuster, which has been an issue of intense focus in the party but hasn’t gained enough traction.

It’s an open question that has taken on new urgency as Biden’s poll numbers have slipped amid haphazard congressional efforts to pass his legislative agenda and rising inflation that has sapped the public’s confidence in the economy.