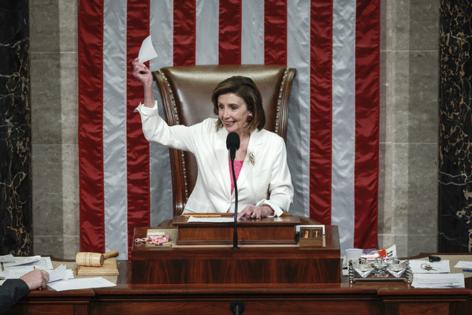 This Thanksgiving Day recess is the second big exodus from Washington for Congress this month. The House and Senate were out of session for Veterans Day the week of Nov. 8. And they were gone for a weeklong break in October.

What this schedule means is that “you get rapid policymaking at the end of the process, where all the deals are struck in the final hours,” said Chris Hoene, executive director of the California Budget & Policy Center and a former director of research for the National League of Cities in Washington.

“They should be there just doing the regular stuff they’re supposed to do,” said Andrew Lautz, director of federal policy at the National Taxpayers Union.

She cited House passage of the American Rescue Plan, which provided economic relief from COVID-triggered issues, as well as a $1 trillion infrastructure package and last Friday, the $1.75 billion budget and tax bill.

“All of these achievements have been made possible by a robust House schedule with committee work weeks — originally borne out of necessity during the height of the pandemic — that allow House committees to hold hearings and (write) legislation without interruption to continue preparing legislation for Floor consideration,” she said.

In addition, there’s more need, said some experts, for members’ presence and services back home on issues exacerbated by the pandemic, such as immigration issues and the maze of new and expanded federal programs to help people cope with the volatile economy.

Because of such pressing issues back home, “there’s more at stake,” and thus constituents want lawmakers’ help, said Brad Fitch, president and CEO of the independent Congressional Management Foundation, which studies Congress.