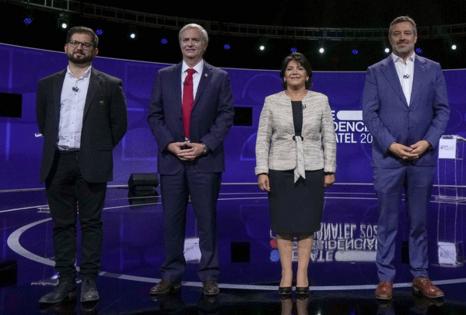 Conservative presidential candidate Jose Antonio Kast and leftist rival Gabriel Boric will square off in a runoff next month, setting the stage for Chile’s most divisive election since the return of democracy in 1990.

With 89% of ballots counted, Kast had 28% of the vote followed by Boric with 26%, according to data from electoral body Servel. Chileans will return to the polls on Dec. 19 for the second round.

At stake is the future of Chile’s investor-friendly economic model that has sustained rapid growth, but left many people behind. Kast, 55, pledges lower corporate taxes and the preservation of pro-market rules while campaigning on a law and order, family values platform. Boric, a 35-year-old former student leader, wants to raise levies for companies, overhaul the pension system and boost social welfare benefits.

Chile, which has long been among the most prosperous and predictable democracies in Latin America, has been rocked by social and political volatility since violent street protests broke out in October 2019. The unrest led the outgoing government of President Sebastian Pinera to approve a referendum to rewrite the constitution which passed by a wide margin. The text will be drafted and put to a vote next year.

“The results make clear that the traditional parties have lost all footing in the electorate, but that the new parties are not yet able to sustain large majorities,” said Jenny Pribble, associate professor of political science at the University of Richmond. “All of this means that whoever is elected the next president of Chile, they will likely face challenges for governing and a very volatile political environment.”

The outcome of the third-, fourth- and fifth-place candidates may hold keys to how a runoff would play out. Franco Parisi was the surprise of the election, placing third with 13%, Sebastian Sichel of the center right has 12.6% while Yasna Provoste of the center left has 11.8%.

Parisi, a celebrity economist living in Alabama who hasn’t campaigned in Chile, could play the role of kingmaker. Turnout was below 50%, which has become more common since voting was made voluntary.

In his speech, Kast called for efforts to attract supporters of Provoste, Parisi and Sichel for the second round and demonized Boric and the Communist Party.

“We’re going to recover peace, order, progress and our freedom,” Kast said. “On Dec. 19, Chile has to choose between freedom and communism.”

Markets, which have been whiplashed on concerns over future economic policy and the new charter, may rally on the result, according to Klaus Kaempfe, director of portfolio solutions at Credicorp Capital in Santiago. The peso could trade closer to 810 per dollar compared with 830 on Friday, while stocks should rise between 3% to 5%, he said.