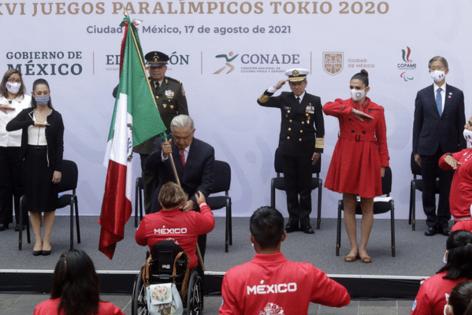 Mexico's next presidential election is still more than two and a half years away, but one potential candidate — the high-profile mayor of Mexico City — is already being accused of cheating.

The controversy began last month when the Mexico City government unveiled new "scholarship" cards that provide 1.2 million preschool, elementary and high school students up to $24 a month for meals and other supplies.

The cards have been around since Mayor Claudia Sheinbaum presented them in 2019. Her opponents aren't happy that her government has been promoting them by holding assemblies with parents that are heavily focused on paying homage to her.

What set them off was a speech from a top federal education official at one of those events. After praising the mayor as a champion of children, he told parents that teachers had been calling it the "Claudia Card."

Opposition parties filed complaints with two electoral oversight institutions, accusing the mayor of illegally using public funds for self-promotion — a long tradition in Mexico despite attempts to root it out.

There are "electoral rules that establish equal footing for all candidates," and "the moment Claudia Sheinbaum campaigns three years early, she is breaking that equality," said Angela Avila, who represents the Party of the Democratic Revolution before the National Electoral Institute.

Kenia Lopez Rabadán, a senator with the National Action Party held a news conference to say that it would only be fair to also "put Claudia's name on everything that this government doesn't do well."

Sheinbaum has denied the accusations, telling local media that the only thing she's endorsing is the right to an education and that "it's not about exchanging support for a vote."

Her chief of staff, José Alfonso Suárez del Real y Aguilera, told the Los Angeles Times that the mayor has not expressed any desire to run for president and that the head of the Federal Education Authority in Mexico City had a momentary "lapse" when he used the words "Claudia Card."