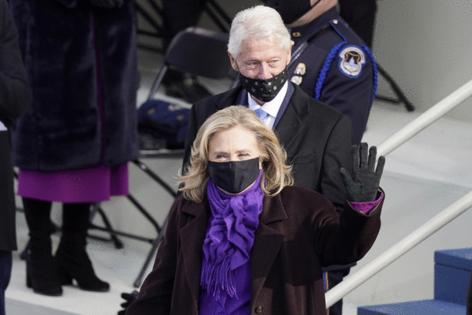 Former Secretary of State Hillary Clinton predicted the Biden administration would remove some punitive tariffs on China, while also calling on the world to prevent military aggression by Beijing and criticizing Russian President Vladimir Putin.

“I know that there’s an ongoing process, as we speak, to try to figure out what would be the best approach with respect to the tariffs,” Clinton said on Friday during a virtual appearance at the Bloomberg New Economy Forum in Singapore. “And I would predict that there will be some changes. But they will not all disappear, because some of them in this new reality we’re living in may well be continued.”

Last month, U.S. Trade Representative Katherine Tai said the administration would directly engage with Beijing to enforce commitments in a trade deal reached last year with former President Donald Trump. China is far behind its purchasing targets, in which it pledged to buy an extra $200 billion in U.S. agriculture, energy and manufactured products over the 2017 level in the two years through the end of 2021.

President Joe Biden’s team has been reviewing U.S. policy on China since taking office and inherited duties Trump imposed on about $300 billion of annual imports from the Asian nation in the hope of taming the goods-trade deficit. More than two years since the duties took effect, the countries are shipping merchandise to each other at the strongest pace on record, making it look as if the protracted tariff war and pandemic never happened.

Clinton said that some of the tariffs imposed during Trump’s trade war with China have “hurt” the U.S., particularly those on agricultural goods.

Speaking on Russia, Clinton said that Putin has sought to “hug China” to stave off potential problems in the far east, while also exercising power through non-state actors.

“He has a very large mercenary force that has been operating everywhere from Syria to the Central African Republic,” Clinton said of Putin. “He has a very large stable of hackers and those who deal in disinformation and cyberwarfare, both in and outside of the government. He’s engaged in a lot of asymmetric power moves.”

“Of course we should cooperate on a range of issues, but we also cannot permit the kind of aggressive military build up, efforts to dominate maritime navigation, the intimidation of nations in the larger Asia-Pacific region,” Clinton said.