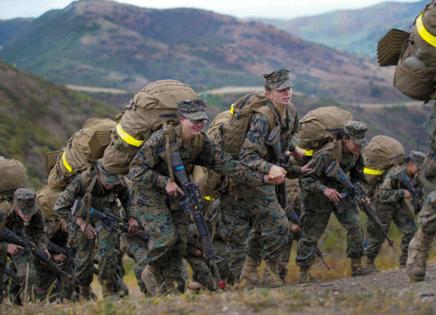 WASHINGTON — A measure that would make young women eligible for the military draft that is moving through Congress and could become law soon is stirring up a long-standing debate about the role of women in the military.

The provision that would require college-aged women to sign up for Selective Service is included in the annual defense spending bill that passed in the House and is up for a vote in the Senate this week.

Critics of the measure argue that it is largely a hollow gesture, because the military draft has been dormant for nearly five decades. But they say that if the federal government were to reinstate the lottery system, women should not be forced into going to war.

Defenders of the policy change say that while a draft may never again be used, Selective Service is one of the last remaining areas in federal law where there is not gender equality for women.

“This is a piece of being a citizen, of being a complete citizen. And when we talk about the real, like normative change in women gaining access to more aspects of power, this cannot be understated,” said Kyleanne Hunter, a senior fellow at the Center for a New American Security and an assistant professor of military and strategic studies at the United States Air Force Academy.

Support for expanding the military draft to women does not fall neatly along partisan lines.

Republican Sen. Joni Ernst of Iowa is for it. Missouri GOP Sen. Josh Hawley is against it. Democratic Rep. Chrissy Houlahan of Pennsylvania and Republican Rep. Michael Waltz of Florida led the effort to make women eligible for the draft in the House version of the defense bill.

“Nobody is ever going to get drafted, so it doesn’t matter,” said James Carafano, vice president for foreign and security policy at the conservative Heritage Foundation. “So other than people really paying attention to this, politicians don’t think they’re paying a very high price for doing this.”

Carafano opposes the measure and said that if there were a national focus on it, the public would be in more of an uproar over the issue.

“This is largely being hoisted on the American people without a real national debate. I don’t remember anybody running for president, I don’t remember anybody running for Congress or the Senate saying, ‘I’m going to draft your daughters,’” Carafano said. “My guess is if we had a national debate about drafting your daughters that a lot of people wouldn’t like it.”

CHICAGO — Each year, thousands of women cross state lines to have an abortion in Illinois — and that number could grow exponentially as pending U.S. Supreme Court decisions and new laws in various states challenge ...Read More