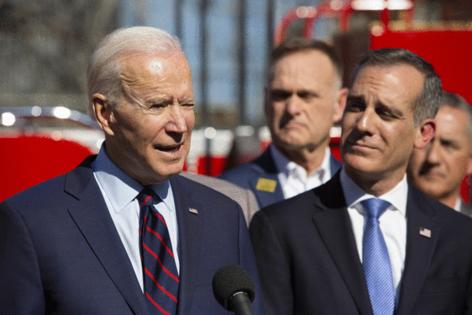 WASHINGTON — In the scramble to appease centrists by scaling back their massive social safety net spending bill, Democrats are discussing cutting in half new funds to address homelessness, public housing, racial inequities in homeownership and renters’ assistance.

But because of the stark differences in the way low-income housing is addressed state by state, the proposed cuts have set off a West Coast-East Coast tug of war over what is expected to be a much smaller $150 billion pie.

The public housing aid would primarily benefit New York and other mostly East Coast and Midwest cities that have large stocks of such housing.

Low-income renters in New York City and similar cities would also be eligible for vouchers to subsidize their housing payments, which would likely be distributed to cities and counties based on need.

Leaders on the West Coast complain that creates a double-dip effect, in which certain cities would benefit from both provisions.

Los Angeles Mayor Eric Garcetti and other California mayors pushed the White House in a virtual meeting last week to ensure that cuts would not be made equally between dollars for rental vouchers and money to repair public housing.

“It unintentionally discriminates in favor of East Coast” cities, Garcetti said in an interview. “So if you’re in New York, you get the bulk of [public housing funding], and an equal share of [vouchers],” Garcetti said. He asked the White House to “protect those vouchers disproportionately, so you can be fair to America.”