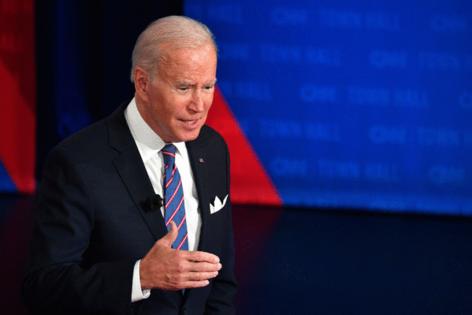 With a key pillar of his climate agenda wobbling on Capitol Hill, President Joe Biden and administration officials are downplaying the role of Congress in passing legislation to slow rising greenhouse gas levels as Democratic lawmakers are ratcheting up the pressure to reach a deal on climate legislation before the president heads overseas for global talks in Glasgow, Scotland.

Biden and aides in recent days have minimized a deadlock in Congress over the opposition of Sen. Joe Manchin III, D-W.Va., to a $150 billion clean electricity provision in Democrats’ budget reconciliation package, a sweeping bill aimed at combating climate change and expanding the social safety net.

Without that electricity provision, the U.S. faces a difficult climb to reach its climate goals of cutting emissions 50 to 525 by 2030, from 2005 levels, according to analysts at the Rhodium Group, an independent research firm.

Congressional Democrats hawkish on climate are wary of sending Biden across the Atlantic with little to show and no substantial climate provisions from Congress.

“The next week is a critical week for President Biden, and for our leadership on the world stage as a country,” Sen. Chris Coons, D-Del., told reporters on Monday.

Before going to Scotland, Biden is scheduled to fly to Rome for a summit of the Group of 20 Nations.

“To have him go to the G-20 and COP26 having to say, ‘Well, we’re still working out the details,’ and then work out the details a week later would be an enormous missed opportunity,” Coons said, using shorthand for the climate summit. “We should empower the president to go speak, particularly in Glasgow where [Chinese President] Xi Jinping will be absent and to pull together our allies in a way that will make a lasting difference for us.”

But administration officials have played down the importance of Congress in pursuing the country’s climate targets, pointing to actions from federal agencies, the private sector and executive actions.

“We don’t need Congress,” Karine Jean-Pierre, the deputy White House press secretary, said Thursday when asked how the administration plans to meet its climate goals. “We can do it without Congress.”

Less than a week away from the start of Glasgow talks, opposition from Manchin and Sen. Kyrsten Sinema, D-Ariz., and oil-state Democrats in the House threatens to undercut the U.S. delegation in its negotiations to limit heat-trapping greenhouse gases, which reached a record high last year.