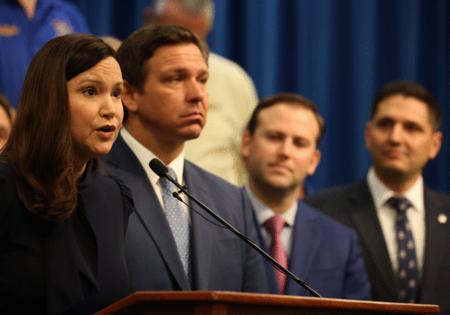 TALLAHASSEE, Fla. — When Texas’ attorney general announced he was suing four swing states in a last-ditch attempt to overturn the results of the 2020 election, lawyers in Florida Attorney General Ashley Moody’s office scoffed.

One lawyer called it “bats--t insane.”

Another called it “weird.”

Despite the criticisms, Moody came out in support of Texas’ lawsuit the next day, co-signing a brief along with 16 other Republican attorneys general urging the U.S. Supreme Court to hear Texas’ case.

“The integrity and resolution of the 2020 election is of paramount importance,” Moody tweeted at the time.

Emails from Moody’s office show that the day before she agreed to lend support to Texas’ lawsuit, her own attorneys were mocking the case, its legal arguments and the motivations behind it.

Texas Attorney General Ken Paxton, a Republican, filed his lawsuit more than a month after the Nov. 3 election, when former President Donald Trump and his supporters were claiming that widespread voter fraud in a handful of states cost him the election.

The case garnered immediate national attention and caught the eye of attorneys working for Florida’s solicitor general, the group of lawyers in the Attorney General’s Office who can decide whether the state should appeal a case to the Florida Supreme Court or U.S. Supreme Court.