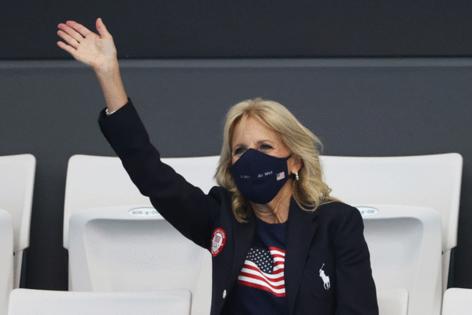 In the early afternoon, she walked the halls of the Medical University of South Carolina’s Hollings Cancer Center, a leading cancer center in the state, during the final week of National Breast Cancer Awareness Month.

A few hours later, at Joint Base Charleston, she hosted a “Joining Forces” event where she thanked service members and their families at the military base, whose history dates back to the World War II era.

At both events, the first lady applauded the people she met. And when asked about how it felt to be back in South Carolina, she gushed after meeting military members at the picnic area at Joint Base Charleston.

“Are you kidding me?” Biden said, beaming. “South Carolina has a piece of my heart.”

In a bright yellow dress that she said she wore to bring “a little sunshine,” Biden nodded her head as she listened to women tell their stories about how breast cancer affected them. Most of the women and doctors wore pink for the visit.

The visit marked Biden’s second trip to the Palmetto State in nearly two weeks, after the first lady made a surprise visit to Brookland Baptist Church on Oct. 17.

Monday’s visit to Charleston, however, was a packed day for the first lady: Hearing about cancer outreach programs, visiting a lab where new drugs have been developed to combat cancer, touring a mobile screening van and addressing service members and their families.

Last week, in an interview on “Good Morning America,” the first lady spoke about how personal cancer advocacy is to her.

Her interest in cancer research dates back to the 1990s, when four of her friends were diagnosed with breast cancer in the same year.

One of them, Biden said, died from the disease.

Her and President Joe Biden’s son Beau was a Delaware Army National Guard member who spent a year in Iraq from 2008 to 2009. He died of brain cancer in 2015 at age 46. His death, she confessed during her visit to the church in West Columbia, temporarily shattered her faith.

Her parents also died of cancer.

“I know what it’s like to sit in that chemotherapy room with your loved one in a chemotherapy chair and just, you know, holding his or her hand and just helping them to get through it,” Biden said in the televised interview.