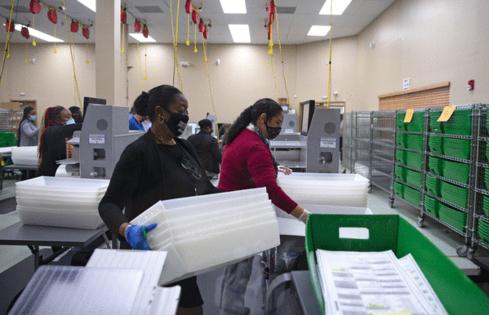 The plea, issued by the Florida Supervisors of Elections, comes after GOP county committees in Lake and Brevard counties called for an Arizona-style “forensic audit” spurred by former President Donald Trump’s false claims of election fraud.

It was sent days after the supervisors, headed by Marion County election head Wesley Wilcox, issued a statement to Florida’s elected officials and candidates urging them to tamp down the rhetoric.

“The strength of our nation rests on the ability that ‘We the People’ have a voice in its governance and are confident in the integrity of our elections,” Monday’s letter states. “In this hour, public trust in our elections is being systematically undermined, to the detriment of all Americans.”

The letter says before and after the 2020 presidential election, “the integrity of our democracy has been challenged by misinformation, disinformation and malinformation that sows discord and undermines trust in America’s electoral process.”

The supervisors pledged that Florida’s voter rolls are accurate, paper ballots are counted using certified, publicly tested machines, and a public audit was already held following the election as it has after every election.

“My goal last week was to elected officials, (and) my advice to them was, ‘Don’t just stand around and allow the election process to get torn down,’” Wilcox, a Republican, told the Orlando Sentinel. “And so this week’s message is more to our voters, letting them know (that) there’s a whole group of people out there that are just spouting misinformation. ... Unfortunately, good people are getting sucked into this quagmire.”

He said elections offices “whether it be mine, or any of my 66 other colleagues, we’re the trusted voices on election-related stuff. We’re the people that can give you accurate information. ... I just want to remind them who we are and what we do. And I’m hoping to instill confidence back in our system.”

Despite Trump winning Florida 51% to 48% over President Joe Biden, the Lake County GOP unanimously demanded that the Legislature conduct an “immediate, open, transparent and independent full forensic audit, including a hand recount” of Lake County and the entire state, “at least as thorough as the audit being conducted in Maricopa County, Arizona.”

The Maricopa audit, authorized by the GOP-controlled Arizona Senate based on Trump’s false allegations of fraud, ultimately concluded that Biden actually got more votes than originally reported. The company that conducted the audit, Florida-based Cyber Ninjas, was later criticized by a data analyst for the Arizona GOP as having “made up the numbers” in a faulty process.